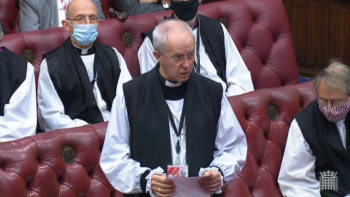 During the second reading of the Assisted Dying Bill on Friday, archbishop of Canterbury Justin Welby (pictured) said there was "unanimity" on the bishops' bench that the law on assisted dying "does not need to be changed".

The bishops' bench consists of 26 Church of England bishops, or 'Lords Spiritual', who are automatically appointed to the House of Lords.

The bill would legalise assisted dying as a choice for terminally ill, mentally competent adults in their final months of life.

The bill passed unopposed following the debate in the House of Lords but is unlikely to progress further without government support.

Other members of the bishop's bench who voiced their opposition in the debate included Martin Warner, Paul Butler and James Newcome.

Warner, who is the bishop of Chichester, said "God does not inflict evil on people".

Robert Winston said the influence of bishops on the "moral compass" of the assisted dying debate is "extremely important".

Religious objections to the bill were also made by Michael Farmer, who called it "an atheists' Bill, denying God and denying eternity", and Patrick Cormack, who said the bill "does not really acknowledge the fact that many of us believe in the afterlife".

Ranbir Singh Suri equated assisted dying with suicide which he called "a crime against our maker, almighty God, and nature".

Citing Sikh religious texts, Suri said: "We have to accept the will of almighty God".

Support for the bill

Molly Meacher, who tabled the bill, said it was "overwhelmingly popular" in society and supported by 84% of the population, including 80% of people who declare themselves religious. She said this was "not surprising" because "the sole aim of this Bill is to reduce unnecessary and unbearable suffering."

Several other supporters stressed the bill would not compel those with religious or other objections to assisted dying to take any part in the process.

Ann Mallalieu said: "However strong your personal view, whether based on religious belief, personal experience or strong convictions about the sanctity of human life, is it right for you as an individual to insist that your view prevails when it will prolong intolerable suffering for someone else who happens to hold a different view?"

National Secular Society chief executive Stephen Evans said: "This debate has again highlighted the role of religion in restricting people's freedom and choices when it comes to end-of-life decisions.

"Opposition to assisted dying is often rooted in conservative religious views. Those views should not be given undue weight in parliament. Yet this is precisely what having religious appointees in our legislature does.

"It's time to end the pretence that senior Anglican clerics have some kind of special moral authority that justifies their privileged place in parliament. All the bishops' bench does is undermine democracy by promoting the narrow interests of religious elites. This debate is a good example of why scrapping the bishops' bench is long overdue."

Write to your MP: scrap the bishops' bench

A bill to remove the automatic right of bishops to sit in parliament has been introduced in the Lords. Help us raise awareness of this by writing to your MP.