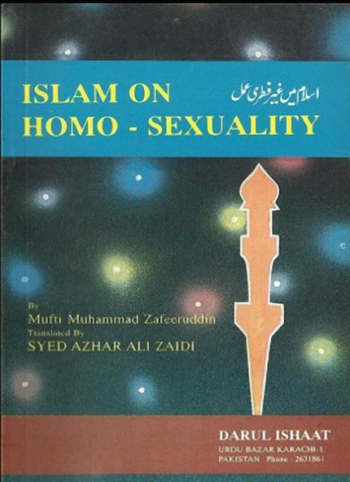 The book, entitled "Islam on Homosexuality", was discovered during an Ofsted inspection at Institute of Islamic Education, an independent Islamic school in Dewsbury, in May.

The book said "participants of the homosexual act should be slained [sic]" because "in filth and mischief of [sic] this act surpasses adultery", according to an Ofsted report published today.

It also said "the evil doers should be put to death".

The book had been stamped by the school as a library book.

A book with the same title (pictured) is described on Amazon UK as an "authentic book on the evils of Homosexuality containing discussion in the light of the Quran, Hadith, History and medicine".

While the headteacher said the book should not be in the school library, other leaders stated that the book was for 'research purposes', according to the report.

The report said: "By permitting this book to be freely accessible to pupils, leaders are failing to promote respect and tolerance for others, a fundamental British value."

NSS head of policy and research Megan Manson said the findings were "horrifying".

She said: "It is appalling that a book calling for gay people to be executed could be found in a school library.

"It is even more disturbing that some school leaders appeared to defend the school's decision to make this book available to children.

"Schools have a duty to promote equality for all. Giving a space for hateful and homophobic religious propaganda clearly runs contrary to that."

The NSS has been lobbying the Department for Education to ensure that consistently failing schools are not allowed to indefinitely undermine young people's fundamental right to a quality education.

The secretary of state said a "firmer approach" would be taken to enforce the standards when there was evidence of non-compliance when independent school standards were updated in 2015.

Ofsted inspectors identified a number of other unmet standards at the school, including:

Institute of Islamic Education is an independent Islamic boarding school for boys and young men between the ages of 11 and 25 years, located in the grounds of a mosque. Pupils are only taught secular subjects in the afternoon, with the morning devoted to an Islamic curriculum.

The school has previously told parents their children faced expulsion if they socialised with non-Muslims.

It has also forbidden children from watching TV, listening to music or reading newspapers.