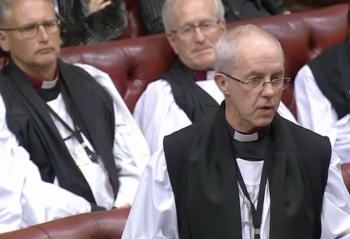 The practice of reserving seats for 26 Church of England bishops in the House of Lords is an "absurd constitutional anomaly" which should end, a peer has argued.

Liberal Democrat peer Dick Taverne made the call in the Westminster publication The House, alongside a piece making the contrary argument from the bishop of Durham.

Taverne argued that the position of Anglican bishops "sets a bad example for democracy" and "increases the influence of the Church of England on our public affairs to a degree which is generally underestimated".

He noted that the bishops receive "special treatment" in the Lords, as they are "entitled to precedence" when they rise to speak and because every sitting is preceded by prayers.

He also said the bishops were "often out of touch with public opinion" on "important moral issues".

He cited the bishops' opposition to the legalisation of assisted dying, which polls suggest is widely supported among the British public, and support for faith schools as examples.

Bill to end bishops' right to sit in Lords

Last year Taverne introduced a bill to parliament which would end the bishops' automatic right to sit in the Lords, and which the National Secular Society helped to draft.

He also explained his case in an episode of the NSS's podcast.

"The anachronistic bishops' bench grants the Church of England a privileged position to advance its own interests in parliament. It's absurd that any clerics are given a lawmaking role solely by virtue of their position in the hierarchy of one particular church.

"This archaic arrangement enables a church that has seen unrelenting decline in affiliation for decades to maintain undue influence over our national affairs.

"Ending the bishops' automatic right to sit in parliament would be a welcome step for equality, fairness and democracy."

In March 53% of respondents to a YouGov poll said the Lords should not continue to have places for C of E bishops, while just 16% said it should.

In response to another YouGov poll for The Times in 2017, 62% said no religious clerics should have "an automatic right to seats". Only 8% said the bishops should retain their seats.

Dick Taverne and the bishop of Durham's articles are available on The House section of the PoliticsHome website.