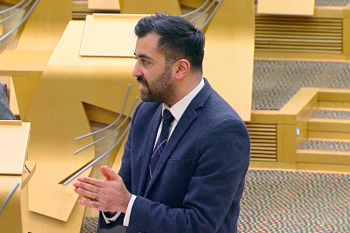 Members of the Scottish parliament have voted in favour of the 'general principles' of Scotland's current hate crime bill, but many have warned that freedom of expression protections must be strengthened.

MSPs backed the bill by 91 votes to 29 in a vote to mark its first parliamentary stage on Tuesday, following a debate.

The National Secular Society has joined with a wide range of other groups to warn of the threat posed to freedom of expression by 'stirring up hatred' offences within the bill.

The NSS briefed MSPs before this week's vote.

Since introducing the bill the Scottish government has said it will introduce several amendments which would mitigate the threat to freedom of expression, including on religion.

This week justice secretary Humza Yousaf said he would accept a series of recommendations from the justice committee and strengthen protections for freedom of expression.

The NSS has welcomed the amendments but said the bill continues to pose a threat to free speech.

In response to this week's vote, an NSS spokesperson said: "We'll continue to work with members of the Scottish parliament to protect free speech as the bill proceeds to the next stage.

"The best way to do this would be to scrap the stirring up hatred offences in this bill altogether. Failing that, further substantial revisions are necessary to avoid an unacceptable erosion of freedom of expression."

The Scottish parliament has an official summary of the debate on its website.