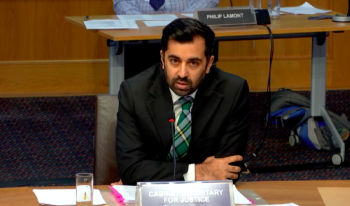 The National Secular Society has urged the Scottish government to ensure freedom of expression is adequately protected after ministers hinted at possible concessions in a bill on hate crime.

NSS chief executive Stephen Evans met with government representatives on Thursday and urged them to reconsider plans to criminalise 'stirring up hatred' on various grounds, including religion.

Mr Evans warned that the vague and highly subjective wording in the bill risked chilling free speech and sending the message that the law was there to protect people from being offended.

Part of the bill, which is currently making its way through the Scottish parliament, would criminalise behaviour deemed "threatening or abusive" and intended to stir up hatred.

As part of its case the NSS argued that protections for free speech in the relevant section of the bill should be at least as strong as their equivalents in England and Wales.

A free expression clause in England and Wales's Racial and Religious Hatred Act says the law shouldn't restrict "discussion, criticism or expressions of antipathy, dislike, ridicule, insult or abuse of particular religions or the beliefs or practices of their adherents".

Currently the equivalent clause in Scotland's bill says only that behaviour will not be judged as threatening or abusive "solely on the basis that it involves or includes discussion or criticism of religion or religious practices".

This week justice secretary Humza Yousaf said he was "very actively considering both the breadth and depth" of freedom of expression clauses in the bill as he gave evidence to Holyrood's justice committee (pictured).

He said he was looking at whether the protection clauses could "go further" and said he "would anticipate some further change" later in the scrutiny process. He also noted the example from England and Wales.

The justice secretary made other relevant concessions recently as he confirmed he would lodge amendments to ensure a successful prosecution will require proof of intent.

The initial draft of the bill would have made it possible to convict someone for behaviour which was judged "likely" to stir up hatred.

Explaining the NSS's position, Mr Evans welcomed the Scottish government's "apparent willingness to take steps in the right direction" but urged it to go further.

"The best course of action remains to remove the section of this bill on 'stirring up hatred', a vague and subjective term which shouldn't be a criminal offence.

"If the Scottish government is set on introducing these offences, as a minimum it must ensure they are very narrowly defined and Scottish citizens are given at least the equivalent freedom of expression protection as their English and Welsh counterparts."

Neil Barber, the NSS's spokesperson for Scotland who also attended the meeting, said: "The vague wording of the bill means any reassurances that the legislation isn't intended to capture subjectively offensive speech will be of no comfort at all to the writer, artist or comedian who, fearing a stressful and costly court procedure, will simply avoid discussing any sensitive issue, with a resultant intimidation of free speech right from the start.

"The government must go further to ensure this bill doesn't seriously chill free speech in Scotland."

Jamie Gillies of the Free to Disagree campaign, which is campaigning to defend free expression over the bill, said amendments along the lines suggested this week would "provide much-needed reassurance".

But he added that the group still had a number of "outstanding concerns", including the use of the term "abusive" in the bill.

Free to Disagree has also warned about the lack of a defence for words spoken in the privacy of the home which are not heard or seen by anyone outside. Yousaf defended the lack of such a defence this week.

The NSS is a supporter of Free to Disagree.