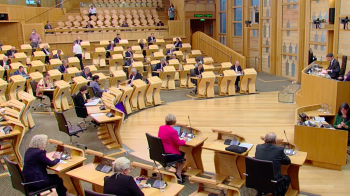 MSPs from across the political spectrum have warned that a bill on hate crime in Scotland poses a threat to freedom of expression during a debate at Holyrood.

On Wednesday MSPs from the Conservatives, Labour and the Liberal Democrats strongly criticised the bill's provisions on 'stirring up hatred', reflecting concerns raised by the National Secular Society and many others.

Some backbench MSPs from the governing SNP also raised concerns about the current drafting of the bill within their contributions.

Before the debate NSS chief executive Stephen Evans was among signatories to a letter from the Free to Disagree campaign, which urged MSPs to oppose the 'stirring up' offences.

But a bid to force the government to remove the bill and work to redraft hate crime legislation, led by the Scottish Conservatives, was voted down.

The bill will now move forward for scrutiny from the Scottish parliament's justice committee, which recently held a consultation on it.

Contributions to the debate

Opening the debate, Conservative MSP Liam Kerr called the bill "vague in the extreme", adding: "Bad legislation is not the way to stop bad behaviour."

Meanwhile his colleague Murdo Fraser warned the bill could lead to the prosecution of those who published cartoons of the Islamic prophet Muhammad – a point he also made in The Scotsman this week.

Liberal Democrat MSP Liam McArthur said the bill needs "urgent and, in places, radical surgery" and that it risks "creating a catch-all offence with the genuine potential to catch all".

Labour's Mary Fee said negatively impacting the right to free speech "is a line that no democratic government should cross" and the relevant part of the bill appeared to "create more problems than it tries to solve".

Justice secretary Humza Yousaf, who introduced the bill, said it was "important" that it was not withdrawn. But he also gave an "absolute assurance for the record" that he was "actively looking" to see where compromise could be found.

Several MSPs also spoke in support of a provision to repeal Scotland's blasphemy law, which appears elsewhere in the bill and which the NSS supports.

After the debate Mr Evans said it had "again highlighted the mounting concern over the Scottish government's plans on 'stirring up hatred'".

"A broad range of civil society groups and now MSPs with very varied political outlooks have warned that the current drafting of the relevant section of this bill risks undermining freedom of expression.

"The justice committee must now note the deluge of criticism which the 'stirring up' provisions in this bill have faced, and recommend that they are scrapped or very significantly amended to protect free speech."