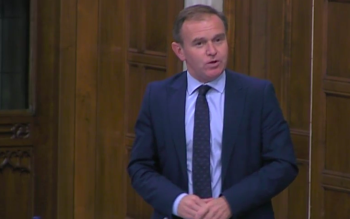 Eustice, the Conservative MP for Camborne and Redruth, said civil servants felt "awkward" when tackling religious slaughter, meaning governments of all shades leave it in the "too difficult to address box".

He said a free vote would "liberate" ministers and the government for wrestling with the issue and allow parliament to decide.

He was speaking as he led a debate on the issue in Westminster Hall on Tuesday.

A free vote or 'conscience vote' allows members of parliament to vote according to their own personal conscience rather than following a party policy.

"Non-stun slaughter is a barbaric practice that causes unnecessary suffering to millions of animals every year. Putting a stop to it would enjoy huge public support – but because ministers feel uneasy about upsetting religious sensitivities, nothing happens.

"We need to be clear that religious freedom is not absolute. Laws concerning the welfare of animals should apply equally to all sections of society, irrespective of their beliefs."

Animal welfare legislation in the UK requires all animals to be stunned before slaughter in order to minimise suffering. However, a religious exemption is granted to allow religious communities to meet Jewish and Muslim religious dietary preferences.

The RSPCA, Compassion in World Farming and the British Veterinary Association all support an end to non-stun slaughter to improve animal welfare at the time of death.

During the debate, Eustice said there had been an "alarming rise" in non-stun slaughter.

He said the time it takes bovine animals to lose consciousness following non-stun slaughter was a "major cause for concern". In the case of cattle, he said it typically takes between 40-45 seconds to collapse and between 1 minute 20 seconds and two minutes for the animal to lose consciousness.

He disputed claims from the non-stun lobby group ShechitaUK that the Jewish method of animal is more humane, saying there was "no evidence" to support that view.

Eustice drew attention to the "mainstreaming of religious slaughter", saying "unwitting customers" are buying meat from non-stun slaughter due to offcuts from religious slaughter methods being slipped into the general market, usually through the service trade.

A similar system operates in Germany where the law makes this clear by stating that a no-stunning permit will only be granted to meet the needs of religious communities.

During the debate Eustice also questioned whether the derogation that permits non-stun slaughter was to accommodate a "religious need" or a "cultural interpretation of a religious need", noting that there are wide variations what is considered 'permissible' by religious groups.

Eustice said options to consider going forward included a ban on non-stun slaughter; the requirement that animals are stunned immediately after they are cut; and the introduction of mandatory labelling of non-stun meat.

In response food minister David Rutley said the government would "prefer" to see all animals stunned before slaughter but "respects the rights of Jews and Muslims to eat meat slaughtered in accordance with their beliefs".

He said the right to slaughter without prior stunning was an "important religious freedom" but said there was a need to balance religious freedoms with improving the welfare of animals. He said it was a "difficult juggle", but "not impossible".

The minister committed to continuing discussion and debate.

The NSS, which campaigns to end the religious exemption to animal welfare laws which allows non-stun slaughter and for clear labelling requirements while the exemption exists, briefed MPs before the debate.

In a blog explaining his stance on PoliticsHome, Eustice wrote that the requirement for meat from non-stun slaughter to be supplied only on the basis of religious need was "not enforceable in practice".

He added that Britain was "being left behind by other developed nations when it comes to our legislation on religious slaughter".