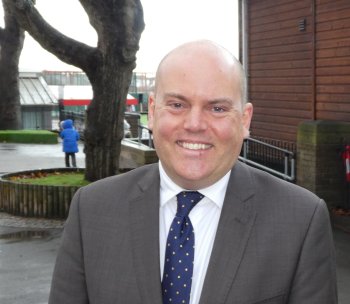 A teacher targeted by religious protesters for teaching about LGBT+ equality will speak at the National Secular Society's 2019 Bradlaugh Lecture.

Andrew Moffat, assistant headteacher at Parkfield Community School in Birmingham, will talk about his 'No Outsiders' scheme for teaching about equality and diversity at primary schools on Saturday 7 September.

The lecture – named after NSS founder Charles Bradlaugh – is an annual event which provides a space for a distinguished speaker to explore a secularist topic in depth.

The No Outsiders scheme aims to prepare children for life in modern Britain by teaching that everyone should be respected and accepted, no matter what their race, religion or sexual orientation.

Moffat became the targets of aggressive protests and threats at the beginning of 2019. The protesters, most of whom were Muslim, objected to children being taught about LGBT+ people because they said it went against their religious beliefs.

Other schools that have used the No Outsiders scheme have also been targeted by protesters.

Moffat will introduce his vision for inclusive education and dispel the myths and misinformation about No Outsiders. He will reflect on what he has learnt as an openly gay teacher at schools where most children have been from Muslim backgrounds.

He will explain why all children, regardless of their religious background, have a right to learn about the diversity of UK society.

"Andrew Moffat has found himself at the centre of a culture war over the teaching of tolerance to those of all genders and sexualities, which has manifested itself in protests outside Birmingham's schools.

Perceptions of the 'No Outsiders' programme, and relationships education more broadly, have been plagued by misinformation, exaggeration and myth. This lecture will be a fantastic opportunity to hear from Andrew himself about the intention behind 'No Outsiders' and about its role in combating bigotry and helping pupils to understand the world around them."

The lecture will take place at the Manchester Art Gallery, which displays a portrait of Bradlaugh by Walter Sickert. Sickert's piece – donated by the NSS's Manchester branch in 1911 – is an iconic image of Bradlaugh standing at the bar of the House of Commons, forbidden on account of his atheism from taking up the seat to which he had been elected multiple times.

The lecture will be followed by an audience Q&A and a drinks reception. Tickets are just £15 – and NSS members get a discount.

Find out more and book your tickets.

I'm excited to see the 2019 Bradlaugh Lecture with Andrew Moffat (No Outsiders: Reclaiming Radical Ideas in Schools). I hope you'll join me there.
Click to tweet