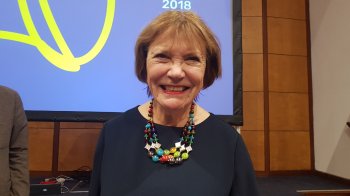 A peer has highlighted the shortage of religiously neutral schooling in England during a House of Lords debate, referencing figures from a major National Secular Society report on the issue.

Joan Bakewell, of Labour, highlighted the fact that almost three in 10 families in England live in areas where most or all of the closest primary schools are faith schools on Monday.

She also highlighted the fact that 53% of rural primary schools are faith based.

The NSS exclusively revealed these figures in its groundbreaking report The choice delusion in December.

The NSS also found that more than one in five families who missed out on their first choice of a non-faith primary school were assigned a faith school.

In Monday's Lords debate Bakewell highlighted figures which suggest 52% of British adults now have no religion.

"Almost three in 10 families in England live in areas where most or all of the closest primary schools are faith schools.

"So what has the government to say about children effectively being forced into faith schools against their parents' wishes?"

In response education minister Theodore Agnew said: "Where parents are not offered a place for schools they expressed a preference for, the local authority must offer them a place at another suitable school with places available."

He also said admissions authorities "must ensure that their arrangements are clear, fair and objective and will not disadvantage unfairly a child from a particular social or racial group".

The government is currently planning to open a new wave of 14 voluntary aided faith schools, which can potentially select all their children on the basis of their parents' religion.

In December a Department for Education (DfE) assessment found that opening the new schools would disadvantage families who did not share the schools' religion.

The NSS's No More Faith Schools campaign is urging the government and local authorities to reconsider these plans and to open inclusive community schools where there are shortages of places.

NSS education and schools officer Alastair Lichten said: "Baroness Bakewell has made an important intervention. Our figures seriously undermine the narrative that faith schools are good for parental choice.

"Ministers should now reflect on their plans to expand faith schools, particularly fully selective voluntary aided ones. These plans will mean more families will be forced into a faith based education for their children against their wishes.

"Ultimately the government should roll back faith based schooling. All state funded schools should be free from religious control, be open to all children and credibly attempt to give children a religiously neutral education.

"And while the state continues to fund faith schools the government must monitor the ways they impose on school choice to mitigate the harm they cause."

The NSS wrote to the DfE when the report was published in December. The society urged minister to monitor faith-based restrictions on school choice and suitability and ensure that all parents have reasonable access to a non-faith-based school.

The NSS has since met with DfE officials to discuss the findings.