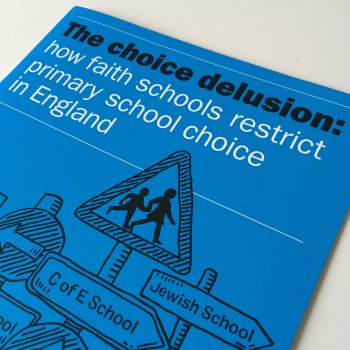 Almost three in ten families in England live in areas where most or all of the local primary schools are faith-based, National Secular Society research has revealed.

The NSS's report The Choice Delusion, published today and featured exclusively in The Sunday Times, highlights a severe lack of reasonably accessible religiously-neutral schools for those that want them.

A common complaint from rural families who the NSS spoke to was that a faith school was the only school in their village.

The NSS based its findings on a study of the three closest schools for hypothetical parents in 520 representative, randomly-selected English postcodes.

In response to the findings the NSS has written to the Department for Education (DfE) to urge it to monitor faith-based restrictions on school choice and suitability and ensure that all parents have reasonable access to a non-faith-based school.

The government has made no estimate of the number of people living in areas where the only reasonably available state schools are faith-based.

The society has also said the problem identified in the report is likely to increase if the DfE fails to act, as the proportion of faith schools is rising. This trend defies a long-term move away from religious affiliation among British people, particularly among the young.

The NSS's report also highlights several case studies where parents have effectively been left with no option other than to send their children to faith schools against their wishes.

"Our findings demonstrate that not only are thousands of families being denied access to appropriate schools for their children, but the Department for Education is failing to act to remedy the situation.

"The best way to solve this would be to roll back faith schools so all state schools are free from religious affiliation and open to all children. While faith schools persist, the government must monitor the ways in which they impose on school choice and ensure all families can access a secular and properly inclusive education for their child."