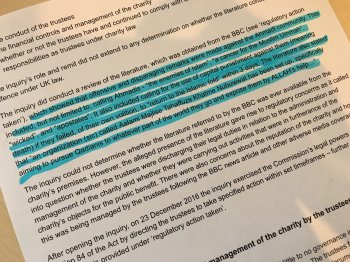 The National Secular Society has questioned why an organisation that displayed literature calling for the killing of Ahmadi Muslims has obtained and retained registered charity status.

A report published by charity regulators on Tuesday said the trustees of Khatme Nubuwwat Centre (KNC) were responsible for a series of failings "amounting to misconduct and/or mismanagement".

KNC, which is based in south London, displayed leaflets written in English which called Ahmadis "enemies of Islam", "wicked" and "a cancer for the Muslim Ummah". They said Ahmadis who refuse to convert to mainstream Islam within three days should face a "capital sentence".

They also stated that Aalami Majlise Tahaffuze Khatme Nubuwwat, a former name for KNC, had been set up "specifically aiming to pursue Qadianis [a derogatory term for Ahmadis] to whatever part of the world they go and expose them by ALLAH's help".

Ahmadi Muslims are a minority sect who have been attacked and persecuted in Pakistan and elsewhere. In 2016 Ahmadi Muslim Asad Shah was murdered by Sunni Tanveer Ahmed in an attack motivated by anti-Ahmadi hatred.

The failings at KNC outlined by the Charity Commission, which regulates charities in England and Wales, also included links to terrorist and extremist groups in Pakistan.

The commission's inquiry found evidence that the charity was being controlled by a Pakistan-based organisation of the same name which has alleged connections to terrorist and extremist groups.

KNC lists its charitable objects as: "to advance the Islamic religion by the provision of a mosque"; "to advance Islamic education for both children and adults"; and "to promote religious harmony by fostering better relations between Muslims and other communities".

The revelation comes just days after the NSS published a major report calling for the advancement of religion to be removed as a charitable purpose.

According to the BBC, Stockwell Green Mosque was first accused of helping to promote acts of terror and hate in Pakistan in 2011.

The Charity Commission's report concluded that KNC "was poorly managed" and had "little to no governance infrastructure in place" to assist the trustees in managing the charity. As a result, the commission issued KNC with an official warning, stating that failure to remedy their mismanagement "may lead to further regulatory action being taken by the commission".

Dr James Caron, an academic at SOAS University of London, said: "Khatme Nabuwwat is a one-issue outfit and that one issue is anti-Ahmadi sentiment."

"This charity has been registered since 1990. We have to ask why such a charity was ever registered.

"It is extremely difficult to see how a charity that has displayed leaflets calling for the killing of Ahmadi Muslims could possibly be serving a public benefit.

"As our recent report on religious charities highlights, the charitable purpose of 'the advancement of religion' can sometimes be used as a cloak for organisations to promote extremist, hateful views.

"This is another case that demonstrates why the inclusion of 'religious activities' as a charitable object leads to a loss of public confidence in the whole charity sector.

"The Charity Commission has previously shown a robust approach to rejecting registration of organisations promoting racist white nationalist ideology, and rightly so. It must take all other forms of extremism and hatred, including those motivated by religion, just as seriously."

The trustees denied publishing or displaying the leaflets. Trustee Toaha Qureshi said: "Someone might have put it there and taken from there with malicious intentions."