Event to mark 30th anniversary of fatwa against Salman Rushdie 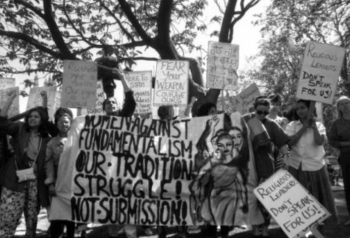 An event to commemorate a gathering of women who defended the right to publish Salman Rushdie's novel The Satanic Verses is to be held in London next Thursday.

The event at Conway Hall – Why we defended Rushdie and why it is still important today – will coincide with 30th anniversary of the fatwa against the author.

A number of National Secular Society patrons will give speeches, including human rights activist Maryam Namazie and Pragna Patel, co-founder of Women Against Fundamentalism and director of Southall Black Sisters.

The event will also include screening of two short films by NSS honorary associate Gita Sahgal, 'Hullabaloo over The Satanic Verses' and 'Struggle or Submission? Women in Islam'.

On 14 February 1989 Iran's Ayatollah Khomeini issued a fatwa demanding that Rushdie be killed over the book's perceived blasphemy against Islamic orthodoxy.

On 27 May that year a massive march of orthodox Muslims demanded the novel be banned in London. At the same time 40 women of many religions and none stood in Parliament Square to oppose the march.

The women carried a banner reading 'Our Tradition, Struggle Not Submission'. They said their stand was a defence of the right to read and dissent, of secular values and of religious freedom.

The gathering was a foundational moment for Women Against Fundamentalism (WAF), a group committed to opposing the rise of fundamentalism in all religions across the world.

Although WAF no longer exists as a formal organisation, many of its members have allied with other organisations to continue to campaign against fundamentalism's impact on women and sexual minorities. They have also mobilised against blasphemy laws and to support the growing movement of people known and unknown across the world fleeing from fundamentalist violence.

The event is being organised by Feminist Dissent, an online journal based at the University of Warwick that brings together innovative and critical insights to enhance understanding of the relationship between gender, fundamentalism and related socio-political issues.

Tickets are free. Those wishing to attend can register here.

This event is supported by the University of Warwick Impact Fund Award and the NSS.