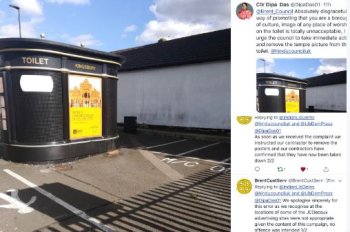 The National Secular Society has criticised a council in north London for removing an advert featuring a temple from a toilet after complaints from a Hindu group.

Brent Council took down a poster, which advertised the area as the "London Borough of Culture 2020", after complaints from the Hindu Council UK.

Dipa Das, a councillor in neighbouring Tower Hamlets who is also a representative member of the Hindu Council, complained about the poster on Twitter on Tuesday.

Das tweeted to Brent Council's customer services team: "Absolutely disgraceful way of promoting that you are a borough of culture, image of any place of worship on the toilet is totally unacceptable (sic), I urge the council to take immediate action and remove the temple picture from the toilet."

Her complaint was backed up by a group calling itself 'Indian Lib Dems'.

In response the council's team apologised and removed the posters.

"We apologise sincerely for this error as we recognise at the locations (sic) of some of the JCDecaux advertising sites were not appropriate given the content of this campaign, no offence was intended.

"As soon as we received the complaint we instructed our contractor to remove the posters and our contractors have confirmed that they have now been taken down."

NSS spokesperson Chris Sloggett said the decision was "a pathetic surrender to demands for a blasphemy code and a waste of council resources".

"Brent Council has given in to an unreasonable religious demand. It has taken the easy way out but in the process it's placed an unreasonable restriction on the freedom to advertise. And it's weakened its own ability, and the ability of other councils, to stand up for free expression.

"Upholding blasphemy codes doesn't create social harmony. It weakens it by encouraging religious groups of all stripes, and others, to insist that their hurt feelings also be recognised. It also wastes public resources.

"Councils, the state and wider society need to get much better at telling religious groups to accept the fact that sometimes in a free society they will be offended."

The Hindu Council welcomed the decision. In a statement on Facebook Sanjay Jagatia, its director secretary general, called the original placement of the poster "shocking".

Jagatia said it was "highly inappropriate to use Hindu deities, images, concepts or symbols for commercial or any other agenda".

He said the issue had "hurt the Hindu community very much" as "trivialisation of Hindu deities, symbols and concepts is disturbing to Hindus the world over".

He added that "Hindus are for free artistic expression and speech as much as anybody else if not more. But faith is something sacred and attempts at trivialising it hurts (sic) the followers."