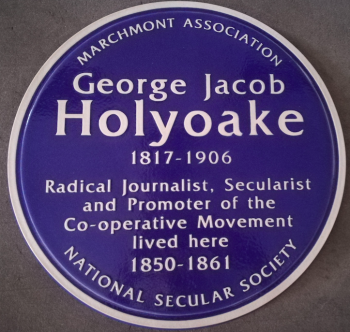 The National Secular Society has unveiled a blue plaque commemorating the British secularist George Jacob Holyoake, who coined the term 'secularism' in 1851, in central London.

NSS CEO Stephen Evans and the deputy mayor of the London borough of Camden, Maryam Eslamdoust, unveiled the plaque on Friday 17 August. The plaque, which the NSS sponsored, is outside 4 Woburn Walk in the Bloomsbury area.

The plaque is part of the Marchmont Association's commemorative plaques scheme which raises awareness of the area's rich social history.

Holyoake was born and raised in Birmingham and moved to London in 1843, but not until he had served six months in prison for blasphemy. He was the last person in England to be imprisoned on a charge of atheism. The NSS was instrumental in eventually getting the common law offences of blasphemy and blasphemous libel abolished in 2008.

Upon settling in London, Holyoake founded and edited various progressive newspapers. He coined the term 'secularism' in 1851 and organised early local secular societies, eventually becoming vice-president of the NSS.

He also championed a free press and the rights of women and was one of the founders of the co-operative movement. The Co-operative Union still occupies Holyoake House in Manchester, which was built in his memory and opened in 1911.

Mr Evans said: "Holyoake's contribution to the rise and success of secularism and other progressive causes was immense. We are delighted to see him commemorated in this way. We hope the presence of the plaque will help to promote a greater awareness of George Holyoake and the concept of secularism more generally."

NSS council member and historian Bob Forder, who also spoke at the unveiling, said Holyoake played an "instrumental role in fashioning ideas for radicals and secularists in the second half on the 19th century".

The blue plaque is the latest initiative to highlight the rich history of the NSS and the broader secularist movement. To mark its 150th anniversary in 2016, the NSS commissioned a portrait bust of NSS founder and Northampton MP Charles Bradlaugh which is now on display in the palace of Westminster.

A potted history of the NSS's first 150 years is available here.