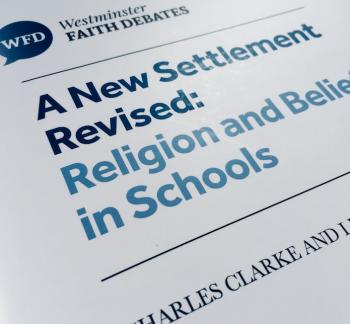 Religious education should be replaced with a new national 'Religion, Belief and Values' subject, a former education secretary has recommended.

The call to reform RE is one of a number of recommendations from a new report from Charles Clarke (education secretary 2002-04) and Linda Woodhead (professor of sociology of religion at Lancaster University) – A New Settlement Revised: Religion and Belief in Schools – a follow up to their 2015 report.

The National Secular Society has broadly welcomed the proposals to reform RE but branded other aspect of the report a "disappointing surrender to vested interests".

The suggested reforms to RE are broadly in line with the National Secular Society's call for legislative change to replace current laws surrounding RE with a new national entitlement for religion and belief learning.

The report recommends that a new syllabus and curriculum for Religion, Belief and Values (RBV) should be determined by a national 'Advisory Council on Religion, Beliefs and Values' (ACRBV), appointed by the secretary of state.

The body would represent "a balance between different faiths and beliefs", but with members "selected for their relevant expertise, and not in order to represent any particular faith or belief".

The report reiterates the widely held view that the current arrangements for RE – where it is devised by SACRES/ASC (Standing Advisory Councils on Religious Education/Agreed Syllabus Conferences) – are not fit for purpose.

The authors however backtrack on previous recommendations that seemed to suggest any instructional/confessional RE should be separated from the academic subject. The latest report states: "of course all schools would be entitled to offer a wider syllabus, and more study, inside or outside school hours." The report does however reiterate calls for Ofsted to inspect religion and belief education, community cohesion and assemblies in all schools.

The report recommends that the right to withdraw from RBV should end following reform.

The report supports the continued existence of faith schools, recommending that "Children of families of faith should where possible be able to attend schools of that faith, and that their current legal right to be given priority in the admissions process should not be removed".

The authors are clear, however, that moves to phase out religious selection are "highly beneficial" and call on churches and other faith bodies to make "strong and continues progress in reducing the numbers of their schools where faith is a criterion for admission".

Arrangements which enable faith schools to discriminate in their employment should be kept "under review, the report says.

On collective worship, the report appears to backtrack on the authors' 2015 recommendation that the legal duty on schools to hold an act of daily (usually Christian collective worship) be repealed. The report cites "important elements of Church of England opinion" as the reason behind their change of mind, along with a concern that abolishing the statutory requirement for collective worship will undermine assemblies.

"Some of the proposals represent baby steps in the right direction, but the report overall appears to be an admission that much needed reforms are not possible without the approval of religious bodies. That is a worrying state of affairs for a modern education system – and again highlights the urgent need to separate religion and state in all areas – particularly education.

"Much of the positives in the report come across as watered down versions of proposals already widely supported in the educational community. The backsliding from the previous report highlights how the privileged position of organised religion in state education is leading to an expedient acceptance of standards that are lower than is desirable."

The National Secular society is campaigning for:

An inclusive and secular education system, with an end to state funded faith schools.

Schools to be brought under the Equality Act to end to religious discrimination against pupils in admissions and against teachers in employment, unless an occupational requirement can be demonstrated.

All pupils to have the same national entitlement to high quality, non-partisan education about religion and belief.

Abolition of the law that requires schools to hold acts of worship. We would instead like to see a duty on schools to ensure that all aspects of its curriculum, including assemblies, are respectful and inclusive of all pupils, regardless of their religion or belief, including non-belief.