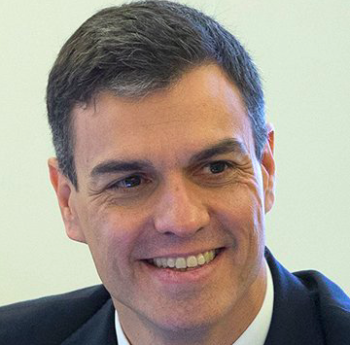 The inauguration of Spain's new prime minister has prompted concern from religious groups due to his support for secularism.

Pedro Sánchez, secretary-general of the Spanish Socialist Workers' Party (Partido Socialista Obrero Español, or PSOE), took office on 2 June without the presence of a crucifix or bible, making him the first Prime Minister in modern Spanish history to perform the inauguration without religious symbols.

An open atheist, Sánchez took his oath without mentioning God and using the Spanish word for "promise" instead of "swear."

Sánchez has repeatedly expressed support for strengthening secularist policies. The Spanish constitution says that "no religious faith shall have a state character", but the Catholic Church receives public funding and Catholicism is taught in state schools.

In an interview with El Plural in 2014, Sánchez said: "I am an atheist and I believe that religion should not be in the classrooms, it has to be in the churches, in the classrooms you have to form citizenship, not people with religious beliefs, that corresponds to the private sphere."

In other statements he has said that he does not want "any religious denomination having preferential treatment."

When running for General Secretary of PSOE in 2014 Sánchez produced a manifesto including a section entitled 'A secular society', outlining his secularist outlook. The manifesto expresses the need for Spain to guarantee civil rights and liberties as a secular and pluralist society in which ideological, religious and cultural convictions and expressions are respected. It says that schools must teach citizenship and reinforce the value of democracy, while no denominational religion should be part of the curriculum or school time table.

The manifesto also states the necessity of repealing Spanish national agreements with the Holy See that privilege the Catholic Church, ending public funding of the Church, secularising national ceremonies, and ensuring religious neutrality of all public institutions and services.

Sánchez's secularist policies are supported by others in PSOE In his first interview, the new foreign minister, Josep Borrell, reiterated the party's plans to re-examine Spain's 1979 Concordat with the Holy See, declaring that the government must "take the state's secularity seriously".

Additionally, the PSOE is committed to legalising euthanasia and strengthening LGBT rights. When it was in power under premier José Luis Rodríguez Zapatero in 2004-2011, the party clashed repeatedly with the Church over its secularising reforms, including relaxing divorce and abortion laws and legalising same-sex marriage.

Catholic publication The Tablet echoed the concerns, accusing PSOE of being "anti-Catholic but pro-Islam."

The Acton Institute, a right-wing religious think-tank, has also warned against Sánchez's policies. "We must stand steadfast against such encroachments and, as a society, proudly reaffirm our religious values," said Ángel Manuel García Carmona, writing on PSOE's plan to 'crack down on Catholic education.'

"Only then will politicians respect the place of the Roman Catholic Church in our nation's history, tradition, and present culture."

According to El País, Catholics in Spain are in decline while the number of atheists is growing. A CIS poll revealed that one in four Spaniards have no religion, and although 70% of respondents said they felt Catholic, 60% of this group "almost never" goes to church except for weddings, first communions or funerals.