NSS: religious dogma must not restrict access to abortions in NI 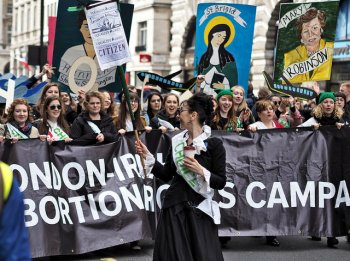 The National Secular Society has reiterated its call for reform to Northern Ireland's abortion laws after MPs and the Labour party said the UK government should legislate on the issue.

Around 160 MPs have backed a cross-party letter, championed by Labour's Stella Creasy, which urges ministers to "ensure comprehensive access to abortion in their own country for women in Northern Ireland".

Creasy is hoping to force a vote on the issue by tabling an amendment to the forthcoming domestic violence bill.

The calls come after voters in the Republic of Ireland chose overwhelmingly to overturn the eighth amendment, which banned abortion in almost all circumstances, in a referendum on Friday. More than 66% of those who took part voted to repeal the eighth amendment to the country's constitution.

The 1967 Abortion Act, which partially decriminalised abortion in England, Wales and Scotland, does not extend to Northern Ireland. Abortion is banned in NI except where a mother's life or mental health are considered in danger.

In 2015 1,438 women in Northern Ireland purchased abortion pills from one provider alone. In contrast just 13 women had abortions in NHS hospitals in NI in 2016-17.

There is currently no executive in Northern Ireland amid an ongoing deadlock over power-sharing.

NSS chief executive Stephen Evans said: "The human rights of women, including their access to reproductive healthcare, should never be restricted by state adherence to religious dogma.

"The resounding victory for those who campaigned to repeal the Republic of Ireland's effective ban on abortion should be a wake-up call to politicians across the UK.

"As things stand all women in Northern Ireland are subject to theocratic restrictions on their reproductive rights and bodily autonomy, whether they like it or not. They cause great misery as those who need to access healthcare have to travel to the British mainland or carry babies and give birth against their wishes and interests. The UK government has the power to change this and should use it."

The NSS has long campaigned for women in Northern Ireland to be able to access abortions. Last year we told the UN's Human Rights Council that Northern Ireland's restrictions on abortion were out of touch with international human rights norms. We said decisions on upholding human rights should not be devolved.

Religion is a crucial reason for Northern Ireland's draconian laws. DUP leader Arlene Foster has made clear that religion is a crucial reason why the party has obstructed reform. On Monday the DUP's Jim Wells said his party would use a petition of concern, a measure designed to protect the rights of minority groups, to block abortion reform if the NI assembly voted for it.

Earlier this month the SDLP voted to give its members a free vote on abortion-related issues, but it retains an official anti-choice stance.

Sinn Fein favours modest reforms to allow abortion in cases of rape, fatal foetal abnormality and where a woman's mental or physical health is under serious threat by the continuation of the pregnancy. The Ulster Unionist party and the Alliance party have said the issue is a matter of "conscience". But the Alliance has called for change in NI's laws in the aftermath of the result in the Republic of Ireland.

Northern Ireland's Green party has welcomed efforts to liberalise the law through Westminster.

And earlier this year a UN committee accused the UK of violating women's human rights by restricting abortions in Northern Ireland. The committee added that the UK should repeal the 19th-century law which criminalises abortion.

In 2016 Stormont assembly members voted against a proposal to allow terminations in cases of fatal foetal abnormality and sexual crime.

Since last week's referendum Ireland's minister for health, Simon Harris, has said legislation to allow unrestricted terminations up to 12 weeks of pregnancy will be tabled before the parliamentary summer break. The proposal is now expected to be law by the autumn.