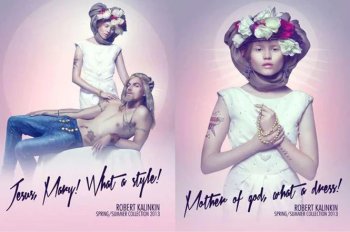 The European Court of Human Rights has ruled that Lithuania violated the right to free expression by fining a fashion company for using religious imagery in an advertising campaign.

Lithuania's Government fined Sekmadienis 580€ over adverts which featured models resembling the virgin Mary and Jesus in suggestive poses in 2012. Its State Consumer Rights Protection Authority (SCRPA) claimed that the ads – which contained captions such as "Jesus, what trousers!" and "Jesus and Mary, what are you wearing?" – were contrary to public morals.

SCRPA reached its decision after consulting representatives from a Lithuanian advertising agency, the State Inspectorate of Non-Food Products and the Roman Catholic Church.

On Tuesday the court found that Lithuania had violated Article 10 (freedom of expression) of the European Convention on Human Rights. It noted that freedom of expression "extends to ideas which offend, shock or disturb" and that in a pluralistic democracy "those who choose to exercise the freedom to manifest their religion cannot reasonably expect to be exempt from all criticism".

The court ordered Lithuania to award Sekmadienis 580€, the equivalent of the original fine it had been wrongly ordered to pay. It also criticised Lithuania for its lack of clarity in justifying how Sekmadienis's advertising campaign was offensive or incompatible with public morals.

The seven-judge panel added: "In the court's view, it cannot be assumed that everyone who has indicated that he or she belongs to the Christian faith would necessarily consider the advertisements offensive, and the Government have not provided any evidence to the contrary.

"Nonetheless, even assuming that the majority of the Lithuanian population were indeed to find the advertisements offensive, the court reiterates that it would be incompatible with the underlying values of the convention if the exercise of convention rights by a minority group were made conditional on its being accepted by the majority.

"Were this so, a minority group's rights to freedom of expression would become merely theoretical rather than practical and effective as required by the convention."

Sekmadienis took Lithuania to the European Court of Human Rights in 2014, after its appeals in the national courts failed.