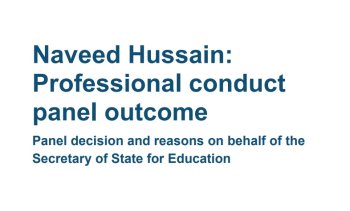 The National Secular Society has said illegal faith schools' proprietors should face "the full force of the law" after the head of an unregistered Islamic school was banned from teaching.

On Monday the National College for Teaching and Leadership (NCTL) released the report of its professional conduct panel investigation into Naveed Hussain, the head and director of Bordesley Independent School in Birmingham.

The panel found that Mr Hussain was responsible for sustained failures over safeguarding and educational provision and had brought the teaching profession into disrepute. He was banned from teaching indefinitely.

Ofsted inspected the school five times between September 2014 and November 2015. On each occasion it raised concerns about pupil safety and wellbeing. The school was closed down after the final visit.

The inspectorate's final report on the schools said its curriculum was "narrow and inadequate". Religious education "dealt only with Islam to the exclusion of any other religions" and several statutory subjects, including humanities, were not taught.

Inspectors also found leaflets entitled "Islam and Terrorism?" at the school. These were written by a man who had been banned from the UK for his extremist views.

Pupils were taught in single gender groups. At one point a girl in year 10 wrote a story about being raped, but there was no evidence the school had filed a report to the local council's safeguarding team.

Staff were not subject to disclosure and barring service checks. Mr Hussain told inspectors that classroom doors were left open to mitigate the risk of wrongdoing. The panel found this explanation "manifestly inadequate" and said inspectors had found doors closed during their visits.

Inspectors also said the school premises raised health and safety concerns. The toilet area in the school had no running water and classrooms were "unkempt, cold and inadequate".

The National Secular Society has welcomed the panel's decision but questioned why Mr Hussain has not been prosecuted.

Stephen Evans, the NSS's chief executive, said: "Whilst we welcome the fact that Mr Hussain will no longer be involved in providing education, we do question why the government hasn't pursued a prosecution against him.

"Pupils were kept in squalid conditions, segregated by gender and denied a proper education. As proprietor, Hussain should be held accountable.

"Children left to languish in such schools are being denied basic rights and left hopelessly unprepared for life in modern Britain. The full force of the law should be brought to bear on illegal faith schools to stop them operating once and for all."

Mr Hussain may apply for the ban to be overturned from January 2020.