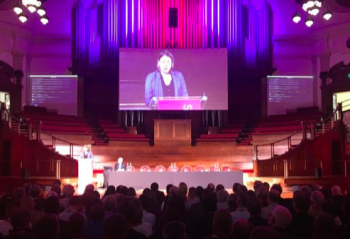 The National Secular Society has urged the Government not to allow proselytising in public service delivery after a minister said Christian charities need not hide their faith while providing public services.

On 21 November the minister for civil society, Tracey Crouch MP, said anyone in Government who discourages open expressions of faith must be challenged. She was delivering a keynote speech at an event entitled 'Raising Funds for Christian Charities and Churches'.

"Some of you here feel that successive governments and local authorities have wanted to applaud all the good things that you do as Christians, but discourage you from speaking openly about the faith that motivates you," she said. "I assure you that that is not the intention, and I encourage you to challenge anyone in government who makes you feel you need to suppress your faith."

Stephen Evans, NSS chief executive, said her words could be interpreted as condoning, or even encouraging, proselytising by faith groups contracted to provide public services.

In a letter to the minister, the NSS warned that proselytising can put vulnerable people in particular at risk of exploitation and called for all contracts with religious providers of publicly-funded services to have unambiguous non-proselytising clauses.

"It goes without saying that social action by faith-based organisations has contributed to the welfare of our society," said Mr Evans.

"However, any attempt to give faith-based organisations more room to discuss religion when running public services risks making their services less inclusive. As the Government looks to faith groups to 'fill in the gaps' in public service provision, the risk of discrimination against employees and service users increases, as does the risk of faith groups using public money to proselytise.

"While we acknowledge that faith groups shouldn't be excluded from contracts and grants simply because they have a religious ethos, it is imperative that such groups deliver their services in an entirely secular manner in order to ensure the service is open to all members of the public without direct or indirect discrimination."

Image: Tracey Crouch delivers her speech to the event 'Raising Funds for Christian Charities and Churches'.