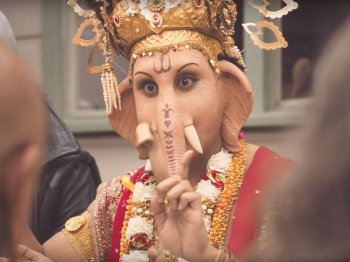 The Advertising Standards Board (ASB) ruled that a joke about Ganesha being the "elephant in the room" breached Section 2.1 of its code, which bans content that discriminates against or vilifies a group of people.

The advert, produced by Meat & Livestock Australia (MLA), depicts deities and religious icons including Jesus, Aphrodite, Buddha and Scientology founder L Ron Hubbard enjoying a dinner party together. The host comments on the difficulty of meeting all their dietary requirements, and suggests that they toast lamb, "the meat we can all eat".

The characters in the advert poke light-hearted fun at each other. At one point, Buddha asks if they should "address the elephant in the room", which prompts the others to laugh and for Ganesha to say: "Not funny two and a half thousand years ago, it's not funny now".

More than 60 groups complained to the ASB, including the Indian High Commission in Canberra. A large proportion of the complaints regarded the depiction of Ganesha.

"This need [sic] to be banned immediately," said one complaint. "The company, in order to gain commercially has trivialized and denigrated Lord Ganesh…This has hurt my sentiments immensely due the amount of disrespect and lack of sensitiveness towards others [sic] faith."

Many complaints addressed the apparent portrayal of Ganesha eating lamb, saying that it was offensive to link Hindu deities to meat. Others took offence at Ganesha being jokingly referred to as "the elephant in the room".

Several contrasted the treatment of Ganesha with the fact Muhammad had not been depicted. "The ad makers show sensitivity towards Muslim sentiments by NOT SHOWING Muhammad, how can then they fail to acknowledge the offense they caused by linking Hindu and Buddhist gods to meat," said one complainant.

MLA said the advert "celebrates religious diversity and does not promote any act of discrimination, prejudice or vilification".

"The advertisement depicts a clearly fictional and humorous scene which unites various divinities, prophets and icons at a dinner table. The guests at the dinner table are clearly intended to be symbolic of modern day people who follow different faiths.

"The advertisement portrays that, while there are many topics upon which different religions diverge, maybe lamb can bring everyone together."

MLA also said it had consulted with experts in the field of religious studies from Australian universities while creating the advert, while the actor who played the role of Ganesha was a practicing Hindu.

The ASB initially rejected the complaints, which began when the advert was first shown in September. But after an independent review, which one of the initial complainants demanded, the Board made a U-turn.

"The majority [of the Board] noted from submissions that Lord Ganesha is a [deity] that signifies perfection so to criticise his appearance would be likely to be seen as ridiculing the Hindu religion and by extension some followers of the faith," the Board said.

"The majority of the Board therefore considered that the elephant comment amount [sic] to a depiction or portrayal of material which discriminated against a person on account of their Hindu religion."

The MLA "respectfully disagrees" with the review, but confirmed that the advert is no longer being broadcast.

"The advertisement was conceived and intended to promote religious inclusiveness in a light hearted and humorous manner," the MLA said in a statement.

"Most critically, it was never the intention of MLA to discriminate against or vilify any religious group."

Many viewers spoke out in support of the advert.

"I'm Indian and I personally love this commercial," said one YouTube commenter. "I love the message this ad is sending, I worship Ganesha and I really don't mind this, if only more people in my country were like Ganesha in this commercial and just get along with the world."

"This warm-hearted and witty commercial presented a vision of interfaith harmony and peaceful coexistence," he said.

"It's regrettable that Hindu fundamentalists acting in competitive piety with Islamists have succeeded in getting the advert banned.

"It must be noted that the creators already felt compelled to sidestep any depiction of Muhammad due to de-facto blasphemy code enforced through the threat of violence and death. It's nothing to celebrate that the professional offence takers of another religion can similarly close down free expression."