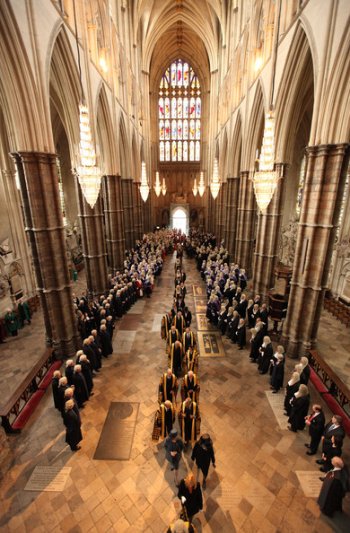 The National Secular Society has written to the Justice Secretary to ask him to scrap annual Anglican services that mark the start of the legal year.

In a letter to David Lidington, the NSS said the services raised "serious questions about the perception of neutrality and independence of the judiciary". The contents of the letter have been reported in the Guardian.

This year's main service in Westminster Abbey will take place on Monday. As Lord Chancellor Mr Lidington will be among those in attendance, along with the Lord Chief Justice, Justices of the Supreme Court, other judges and members of the legal profession.

The service is conducted according to the rites of the Church of England and the attendees pray for guidance. The judges attend it fully robed, in their official capacity and during working hours.

A similar service at York Minster features a procession involving high court judges, circuit judges, tribunal judges, district judges, Queen's counsel and other members of the Bar attending in robes. The NSS has lodged a Freedom of Information request asking the Ministry of Justice how many judges' services were held in the different parts of the UK in 2016 and how much the department has spent on them over the last five years. The Society is also working on challenging a comparable event in Scotland.

"Judges' services add nothing to judicial competence and serve only to privilege Christianity," the NSS wrote. "They are also a burden on the taxpayer. It cannot be in the interests of justice that these services continue and we ask that you initiate their ending."

The letter said the services compromised judges' ability to keep their religious views private and showed "disregard for their duty to avoid acting in a way that is seen to compromise their impartiality". It said they conflicted with the spirit of the judicial oath, which requires justice to be administered 'without fear or favour, affection or ill-will'. It added that the services may create "a reasonable apprehension of bias" and compromise "the old adage: justice must be done and be seen to be done".

The NSS also called for stronger guidance on the need for judges to retain religious impartiality. It said its point was "not merely theoretical" – citing the recent case of the disgraced bishop Peter Ball, who was allowed to evade justice for more than 20 years after reporting restrictions were placed on his case.

Judges' services date back to the Middle Ages, when the High Court was held in Westminster Hall and judges prayed for guidance at the beginning of the legal term.

The NSS's position has previously gained support from legal commentator Joshua Rozenberg. In 2013 Rozenberg wrote: "It is not very edifying to see independent judges taking part in religious rites which are, at best, meaningless to them and, at worst, offensive to their actual beliefs".

The Westminster Abbey service will be followed by a breakfast hosted by the Lord Chancellor, which the NSS did not object to.

Stephen Evans, NSS campaigns director, said the NSS sent the letter because "an independent judiciary shouldn't align itself with the established Church".

"Judicial neutrality, and the perception of neutrality, are crucial elements of a democratic society. Judges regularly make decisions on issues involving religious groups and individuals. They are entitled to hold religious views privately but they should not play any part when they are performing their public duties.

"And the public will only have confidence in them if they consistently make their neutrality clear. Praying for guidance on official time undermines that. The legal system is supposed to be secular."