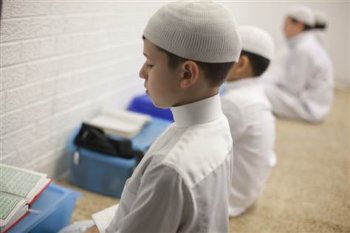 Ofsted inspectors have downgraded an independent Islamic school in Tower Hamlets after finding "grimy" facilities, "inappropriate" books and a camera placed in the school toilets.

Inspectors concluded that pupils were not being "prepared for life in modern Britain" after discovering "Inappropriate literature regarding women's role in society".

Pupils at the Darul Hadis Latifiah had "no planned opportunities" to "socialise or work with girls" and very few pupils were able to name "the new British Prime Minister or were aware of the first female presidential candidate in the elections taking place in the United States of America."

"A book was found in the school library which promoted inappropriate views of how girls and women should behave," which the school's leaders claimed they were "unaware" of.

"There are too few opportunities to learn about women in modern society," the report said, and respect for women was taught during Islamic studies but limited "to the roles of motherhood and families."

Inspectors agreed with a pupil's view that toilets, changing rooms and showers were "grimy and disgusting." The school needed to ensure that its premises were "safe and hygienic" in future, and the toilets were described as "particularly unclean". Mouse droppings and sharp metal objects were found on the floor.

A camera was found "in the communal area of the toilets" with images it displayed "on plain view" in the reception area to visitors. Leaders could not account for "why and how the camera had been installed" and pupils told the inspectors that it was an invasion of their privacy.

Pupils raised "vociferous" complaints about the school to inspectors, complaining of an "overzealous" attitude to discipline by staff.

If pupils asked about sex and relationships they were given detentions, some pupils told inspectors. The school was hindering pupils' personal development, the report said.

"These children have had the courage to raise complaints themselves about the school. Schools that fail young people so catastrophically should be closed down. Countless other children suffer in schools like these, deprived of any education that might prepare them for modern life.

"This is not the first time derogatory material about women has been found in an independent Islamic school and it will not be the last. We'll be urging Ofsted to ensure that scrutiny of these schools continues to intensify under its new Chief Inspector."

Overall, teaching was found to be "inadequate", with pupils often left simply copying from textbooks.

The inspection found that safeguarding was ineffective, leaving pupils at risk, and Ofsted instructed school leaders to "ensure" proper measures were put in place as required by the Prevent duty to prevent students being drawn into extremism. Some pupils had been absent from the school for three weeks at a time, and the school failed to supply information on how they investigated these unauthorised absences.