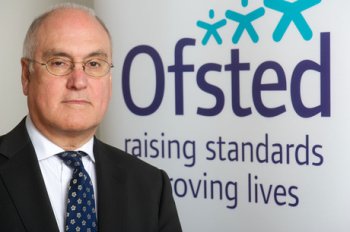 Sir Michael Wilshaw, the Chief Inspector of Schools, has told Education Secretary Nicky Morgan that hundreds of children are being exposed to extremist teaching or suffering inadequate education in independent religious schools recently re-inspected by Ofsted, with sexist books stocked in school libraries, narrow curriculums which focus on Islamic studies and appalling treatment of female governors at one Muslim school.

After the recent closure of the Bridge Schools Inspectorate, a body tasked with inspecting Muslims and Christian independent schools, Ofsted became responsible for inspecting all schools previously under the purview of the BSI, and carried out inspections of "all 17 schools that the BSI had not inspected since September 2012" and carried out inspections of a further five schools that the BSI had recently reviewed.

The National Secular Society has repeatedly raised concerns over the Bridge Schools Inspectorate, most recently in 2014. In 2010 the NSS called on then education secretary Michael Gove to "close the Bridge Schools Inspectorate and bring its work back under Ofsted". The Government responded saying it would "strengthen the regulatory framework to ensure extremists cannot operate in schools".

In a new advice note to the Secretary of State for Education dated Sir Michael notes the concerns he had raised in 2014 about "the quality of BSI inspection and reporting" before listing a catalogue of failures at faith schools which the BSI had been responsible for.

Of the 22 schools Ofsted inspected, of which seven are Christian and fifteen are Muslim, Ofsted found just five to be good or outstanding, with eight requiring improvement, and it rated nine as "inadequate".

Sir Michael said that "Of the 22 schools inspected, 14 failed to meet at least one of the independent school standards and 11 did not meet the standards in four or more areas".

Most worryingly, "four failed to demonstrate that they promote fundamental British values", "eight failed to meet the standard for safeguarding" and eight schools did not even meet the health and safety standards.

At Al-Ameen Primary School, "older pupils did not know the term 'government' or understand its role in a democracy. Very few could name any political parties." Sir Michael told the Secretary of State that "pupils had little understanding of British institutions or the democratic process".

The Ofsted report also found that teachers at Al-Ameen "were not protecting pupils from reading inappropriate literature about extremist, sexist or partisan views" and that "inappropriate books" were found in the school library, including one text that asserted that "women are less reliable than men as witnesses."

Furthermore the primary school was "not ensuring that the school fulfils its responsibilities set out in the Prevent duty."

During one inspection, of the Darul Uloom Islamic High School, "the only female governor sat out of sight of the male governors in an adjacent room to the main meeting. As a result, she could only contribute to the meeting through a doorway. Governors told inspectors this was their usual arrangement." Respect for women will now be a "primary focus" of "subsequent monitoring" of the school by Ofsted.

At one school inspectors found that while "much time" was given to Islamic studies, there was little teaching of creative subjects.

The Cornerstone School, an independent Christian school which aspires for all pupils to "discover that they are indeed citizens of that heavenly Jerusalem", also came under fire. The 2011 BSI inspection praised the school because its pupils "are developing a deep, Bible-based faith" but Ofsted rebuked the school after it found that pupils did not have the opportunity to study music, art, drama or technology.

Inspectors also warned that at some schools staff "could not be sure that pupils who leave to be educated elsewhere were not being exposed to harm, exploitation or the influence of extremist ideologies" because "inadequate systems" were in place for pupils who leave some schools – meaning pupils could "go missing" from the education system.

Sir Michael warned the Department for Education that "more than 2,000 pupils are being educated in 17 schools where the education was judged not to be good enough."

He added, "Seven hundred children attend schools where inspectors considered that pupils were not being adequately prepared for life in modern Britain."

NSS campaigns manager Stephen Evans commented: "The situation in these schools vindicates the concerns that we have been raising with the Department for Education for many years about the BSI and the ability of religious groups involved in education to effectively inspect themselves.

"The closing down of BSI is a positive development and we're pleased to see the schools it was responsible for now receiving independent and objective inspections, albeit with alarming findings.

"For too long children and young people have been left to languish in abysmal conditions where their right to education is denied and in some cases – as Ofsted shows – they are exposed to extremism.

"Religious schools are a rapidly growing sector of independent education and without robust inspections there is a real danger that the proliferation of such schools will impede children's independent rights, harm future community cohesion, and increase the potential for radicalisation of young people.