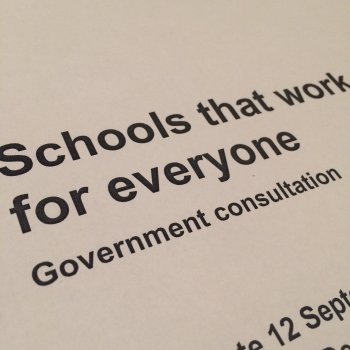 The National Secular Society has responded to the Government's consultation on plans to remove the faith based free-school admission cap and criticised alternative measures to promote integration as "ineffective and tokenistic".

Though acknowledging that the admissions cap had failed to prevent minority faith schools from being segregated, the NSS warned the Government that the cap was the "only meaningful effort" to "address the problems caused by faith-based schooling."

At present, all oversubscribed faith based free-schools are subject to a 50% cap, requiring them to keep at least half of their places open to local children, regardless of religion or belief. However, the Catholic Education Service has refused to open new free schools, insisting on the ability to select all pupils on religious grounds.

Stephen Evans, National Secular Society campaigns director, said: "The Department for Education appears to have bullied into this proposal. Rather than being subservient to the Catholic Church, ministers should consider making religious involvement in publicly funded education conditional on the schools they run being non-discriminatory.

"A further expansion of religiously selective faith schools is the antithesis of inclusive education. Whilst these proposals may create extra capacity in the schools system, they will do so by sacrificing equality and social cohesion. We urge the Government to abandon them."

Measures suggested by the Government to ameliorate the segregation inherent in minority faith-based schools were "tokenistic" and likely to be "ineffective", the NSS said.

One recommendation made by the Government to replace the cap is to require new faith schools to prove that there is demand for places at the school among parents of other faiths.

The NSS response reminded the Government that this was not a new proposal.

"Under the existing arrangements for opening schools, all free schools, including those with a designated faith or faith ethos, are required to demonstrate how they will be 'attractive to parents and pupils from outside your faith community'."

The Department for Education already claims the requirement to be inclusive is "tested rigorously at every stage of assessment and 'pre-opening' as well as after schools open".

The NSS suggested that "Given that this measure is already supposed to be in place, we are highly sceptical as to whether it will be enforced in the future."

Support for a good local school should not be conflated with support for a faith school explicitly, the Society warned.

The Casey Review into integration in the UK, launched last week, warned that "segregation appears to be at its most acute in minority ethnic and minority faith communities and schools".

"If we don't want Britain to be religiously and ethnically segregated, our schools shouldn't be," the NSS submission said.

Other DfE recommendations included asking schools to consider twinning arrangements with schools of other faiths, but the NSS said that this was "no substitute for ongoing real world interactions between pupils in integrated schools in the same school for every school day."

The NSS said the Government was "deluded" if it believed its proposals would make minority faith schools more integrated, inclusive and appealing to those who do not share the religion of the school.

You can read the NSS response in full here.