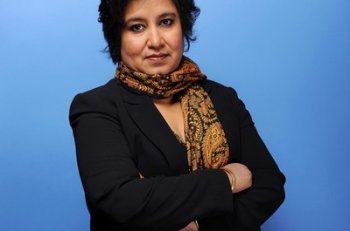 Nasreen said that in the 1980s she "wrote about Islamic fundamentalists. I said that they should not go unopposed or they will destroy our society, that's exactly what's happened now.

"Islamisation started in Bangladesh in the 1980s and in the 80s I was very worried."

Several fatwas were issued calling for her death for secular writing, and Nasreen has not returned to Bangladesh in over twenty years.

There has been a spate of killings in Bangladesh, with secular writers targeted by Islamists and attacked with machetes.

Nasreen said that the current government had failed to respond strongly enough to the attacks. The father of one murdered writer said the government was showing "silent support" for the killings.

"I am very worried. Bangladesh was born as a secular state but now it's a kind of fundamentalist state," Nasreen said to AFP. But now "Islamic fundamentalists are very powerful, they can kill anyone if they want.

"And because those atheist bloggers criticise Islam ― they criticise other religions too ― but because they criticised Islam they were hacked to death and the government didn't take any action against those killers."

The writer said that she was used to living under guard with persistent death threats. "I think I've got used to it, you have to.

"Of course every time a fatwa is issued I get shocked, I get sad, I get scared and then you know you have to live your everyday life."

Discussing Islamist attacks on secular writers and the attack on Charlie Hebdo, Nasreen said that "Freedom of expression cannot exist without the right to offend."

"Many of my books, people say they hurt their religious feelings.

See also: 2015: A year of terror for Bangladesh's secularist writers