Government challenged over treatment of non-religious views in RE lessons 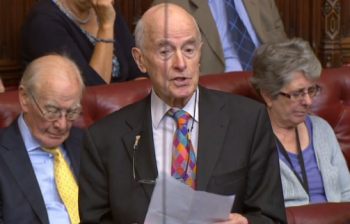 The Government has been challenged in the House of Lords over its approach to the inclusion of non-religious worldviews in religious education.

Lord Taverne, the Liberal Democrat peer and an honorary associate of the National Secular Society, asked the Government to explain why it had "condemned" guidance on the teaching of non-religious worldviews in religious studies.

The guidance, written by Dr Satvinder Juss – a Professor of Law at King's College London, was issued following the High Court's ruling that the Secretary of State for Education Nicky Morgan had made an "error of law", which could lead to the neglect of non-religious worldviews in secondary schools.

The guidance contradicts the Department for Education's own guidance which states that the ruling "does not affect how schools are teaching religious education".

The Government has argued that the case was won "on a very narrow, technical point" and said that it does not "accept the wider interpretation" offered in the Dr Juss' guidance.

Lord Nash, the schools minister, said that it was "inaccurate" to say that there was a need to balance the teaching of religions "by compulsory and systematic teaching of a non-religious world view to the same extent."

Lord Taverne asked "is it really the Government's view that children should not be encouraged to think critically and make up their own mind and should not be made aware of the views of a very large and growing number of people in this country who do not subscribe to any religion?"

In response the schools minister said that "all six GCSE-awarding bodies' GCSE content includes development of students' understanding of wider beliefs, including a non-religious world view."

He added that "All children should be made aware of the basics of all religions as part of a broad and balanced education. It helps you to respect someone if you understand more about them."

Lib Dem peer Lord Storey asked the minister to reflect on "why, if the Government believe that non-religious beliefs have a full and important place in religious studies, they have moved to encourage schools and those who set syllabuses to ignore a legal judgment that sets out exactly that position?"

Lord Harrison added: "Do the Government not recognise that their advice to schools may in itself contradict the law"

Lord Nash responded that "a much wider interpretation is being made of this narrow judgment than should be".

The schools minister also said that the Government was "looking at what more can be done to strengthen the curriculum to further prepare pupils for life in modern Britain through citizenship, PSHE [and] character education".