Faith school pupil not allowed on council-run ‘Christian only’ bus 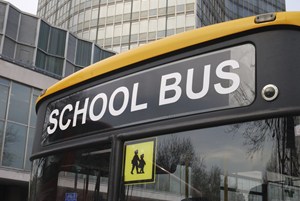 The National Secular Society has urged a local authority to review its school transport policy after a pupil was told he couldn't use the council-run school bus because it is provided only for church-going pupils.

The boy's family told the Shropshire Star that their 12-year-old son, who is already a pupil at Holy Trinity Academy in Telford, had recently had to change address to live permanently with his mother. However, when the family tried to arrange for school transport for him, they were told he cannot use the subsidised bus as it is only for church-going pupils. Holy Trinity is a state funded multi-faith academy.

In a letter to the leader of Telford & Wrekin Council, the National Secular Society's campaigns director, Stephen Evans, urged the Council to amend its policy to ensure that all children are treated equally, irrespective of their faith background.

"Faith schools being allowed to discriminate against pupils on religious grounds does not justify a local authority discriminating against non-Christians in a similar fashion when providing school transport."

"Once children have been accepted into a school it's reasonable to expect that any travel assistance they receive from the local authority will be fair, equitable and non-discriminatory.

"Discrimination in school transport provision may be regarded as a side issue compared to the wider issues of discrimination caused by faith schools, but for the families on the receiving end and for the children who can't sit on the same bus as their friends and neighbours, this unfairness is very real."

According to the boy's father other parents are experiencing similar issues. Without the council provided school bus he says his son's journey would be unsafe, involving crossing a busy road. However, it is up to the local authority to determine if a child's walk to school is unsafe.

Emily Taylor, a spokeswoman for Telford & Wrekin Council told the Shropshire Star that "When a parent prefers to send their child to a school which is not their designated nearest school from the home address, the parent will assume responsibility for the provision of transport and associated costs. However, the Council's policy makes special provision for parents choosing to send their children to a religious school based on their religious beliefs.

Earlier this year Flintshire Council announced it was to review its school transport policy which saw Catholic pupils given free travel but made non-Catholics on the same council-run bus pay. In 2013 one mother in Durham was told one of her two sons (both traveling to the same state school on the same bus) would need to pay as he wasn't baptised.

The Equality Act requires local authorities not to discriminate against a person on the grounds of their religion or belief. However, an exemption means that this doesn't apply to school transport – an arrangement that Parliament's Joint Committee on Human Rights warned would encourage authorities to treat the religious and the non-religious differently.