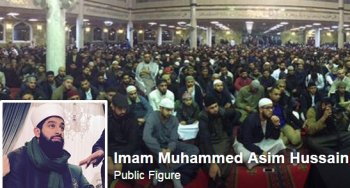 An influential British imam has praised the killer of the former governor of Punjab, Salman Taseer, who was murdered in Pakistan in 2011 after calling for reform of the country's blasphemy laws.

Following the carrying out of Mumtaz Qadri's death sentence for the murder, a post on Facebook by the Bradford based Imam Muhammad Asim Hussain, said it was a "dark day in the history of Pakistan; the day … Mumtaz [Qadri] was wrongfully executed and martyred in the way of Allah, when he did what he did in honour of the Prophet."

Asim is described as a "popular Imam and speaker amongst Muslim youth in the UK" and is the founder of a registered youth charity that aims to give young people a "deeper, more positive awareness of their faith". According to his website he "tirelessly travels throughout the UK to inspire the youth to the way of Islam through his lectures".

Imam Asim told his over 100,000 Facbook followers that the murderer was a "true servant of Allah" and a "lion" of Islam and described him as a "ghazi" – a Muslim fighter against non-Muslims.

Nearly four thousand people 'liked' the post and many commented on it endorsing what the imam had said – though other Muslims challenged him.

One response said "Stop teaching your version of Islam. The Islam I've learned promotes peace and love to Muslims and non-Muslims alike. Another response said that "what [Qadri] did was right" while others said the man was not a martyr. Other comments said that the murder was wrong but that Salman Taseer, the secular Muslim governor of Punjab, should have faced some form of punishment in Pakistan's judicial system.

Imam Asim added later that "to honour the Prophet … is the greatest of acts, to dishonour him … is the worst of acts".

Salman Taseer was killed in 2011 by his bodyguard, Malik Mumtaz Hussein Qadri. Qadri reportedly shot his victim twenty-six times with a sub-machine gun.

The governor had recently spoken out in support of Asia Bibi, a Christian woman sentenced to death for blasphemy.

Friends said that Taseer knew he was endangering his own life by criticising the blasphemy law.

In 2010 Taseer told the BBC that he wanted to see a "liberal" Pakistan rather than a Pakistan of "darkness and persecution and of cutting off hands and cutting off heads."

Stephen Evans, National Secular Society campaigns manager, said: "Salman Taseer was a brave and principled advocate for religious tolerance in Pakistan. Support for his murderer within Britain, and the religious fanaticism it reveals, paints a disturbing picture of the future of free expression and social cohesion. It's clear that freedoms we have long taken for granted are not universally supported and we're going to need a strong civil society response, including from Muslims, against those promoting this sort of religious fanaticism."

Qadri was executed in Pakistan on 29 February 2016 and vast crowds numbering in the tens of thousands attended his funeral to show their support.

A court in Lahore is expected to decide the fate of Asia Bibi on March 26.