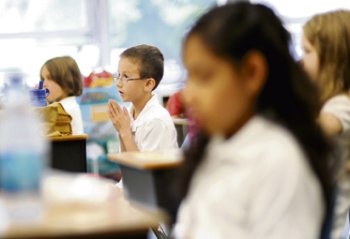 The National Secular Society (NSS) has warned that publicly funded schools shouldn't be used for evangelism after a report from the Church of England stressed an "urgent need to focus on children, young people and their parents".

The report from the Church's Evangelism Task Group, published in 2015 but discussed at this week's General Synod, says that "while we recognise that we should not be driven by a sense of fear or anxiety the current and future health of the Church of England depends on a renewed sense of urgency to engage with children and young people."

In a letter to Nick Gibb, the minister of state for schools, the NSS called for a duty on all schools, including schools of a religious character, to be respectful and inclusive of all pupils, regardless of their religion or belief, including non-belief.

Stephen Evans, NSS campaigns manager, said: "We're becoming increasingly concerned about the way in which the Church is using publicly-funded education as an opportunity to proselytize.

"These are publicly funded schools, often with a mixed intake of children from a range of faith and non-religious backgrounds. The way in which some church schools are imposing a Christian ethos in what are essentially pluralistic settings is infringing upon parental rights and failing to respect children and young people's own right to freedom of religion or belief."

Mr Evans said parents and school governors have been increasingly contacting the NSS with concerns about a range of issues including schools introducing multiple prayers throughout the day meaning parents cannot effectively withdraw their children from school worship; the values of Church of England faith schools being presented as uniquely "Christian"; religious paraphernalia in classrooms; regular priest-led assemblies and pastoral care being delivered through 'school chaplains'.

One parent governor told the NSS that he felt "very isolated and uncomfortable" by what he described as "an aggressive new push to convert children" at his school.

In 2013 the former chair of the Church of England's Board of Education told the General Synod "We don't need to attract [children, young people and parents] to church they're already there, if we embrace our church schools fully."

More than one million children attend publicly-funded Church of England schools and with more than 130 sponsored and 350 converter academies, the Church is the biggest sponsor of academies in England.

The Church of England's finance chief said that an 81-year-old was eight times more likely to attend church than a 21 year old, the Independent reported, and that church attendance was likely to halve over the next thirty years.

See also: "Classrooms should be free from an overbearing religious ethos".