Petition to remove bishops from the House of Lords gains over 10,000 signatures 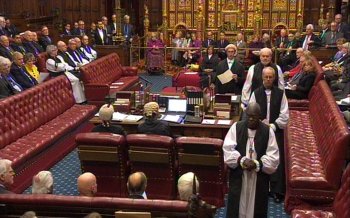 A petition to remove Church of England bishops from the House of Lords has gained over 10,000 signatures in the space of a week – meaning it will now receive a response from the government.

The petition was launched in response to the Anglican Communion's censure of the Episcopal Church for the US group's support for equal marriage.

The petition says: "With the publication of the Church of England's intention to sanction the US Episcopal Church over the latter's sympathetic stance towards equal marriage, the C of E is quite out of step with UK Law and indeed common humanity. Thus we feel strongly these bishops have no place in our government."

The National Secular Society campaigns for the disestablishment of the Church of England and its separation from the state, including an end to the privileged positions bishops hold with reserved seats in the House of Lords.

Currently 26 bishops, including two archbishops, have seats in the House of Lords.

Justin Welby, archbishop of Canterbury, recently boasted of the bishops' influence, describing the bishops' bench as the "most orthodox since WWII".

He said the Church was "still a major part of the glue that holds society together. A recent attempt to introduce assisted suicide was crushingly defeated in Parliament. We are exempted from the same sex marriage act, showing that our vioice is still heard against the prevailing wind of our society, and at much cost to ourselves, by the way. The Church of England is still a primary source of leadership for communities, to the dismay of the secularists. It is a struggle, but we are not losing."

NSS campaigns manager, Stephen Evans, commented: "It's quite clear that the Church of England will not voluntarily give up the political power and prestige that reserved seats in the House of Lords gives it.

"The changes must be forced through politically and hopefully this petition will demonstrate to MPs that such changes would welcomed my many British citizens who recognise that an unelected Bishops' Bench is archaic, unfair and undemocratic. British society no longer looks to the Church for moral leadership; its institutional privileges are unjustifiable.

"Most Western democracies have long abandoned all links between Church and State, with no discernible adverse consequences. It's time we did the same."

The petition can be signed here. Petitions attracting 100,000 signatures will be considered for debate in Parliament.