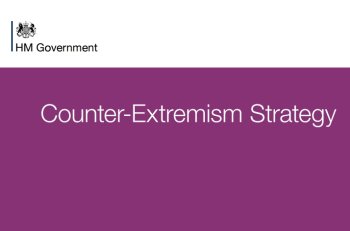 The Government has released its long-awaited counter-extremism plan, and set out a host of measures aimed at tackling the spread of radical Islamist ideologies.

Under the plans announced by the Government, convicted terrorists will be automatically barred from working with children and other "vulnerable people", and parents will be able to apply to have their children's passports removed if they fear they may be at risk of travelling to join jihadist groups abroad.

In a move welcomed by the National Secular Society, the Government will "commission an independent review to understand the extent to which Shari'a is being misused or applied in a way which is incompatible with the law."

The strategy says "We will never countenance allowing an alternative, informal system of law, informed by religious principles, to operate in competition with [UK law]."

However, the NSS has urged the Government to be cautious about plans to hand-out £5 million to "moderate Muslim groups" and to a newspaper run by "moderate imams", warning that similar schemes in the past had seen funds get into the wrong hands.

The NSS challenged the Government to account for how "moderate" groups and religious leaders will be selected.

Stephen Evans, campaigns manager of the National Secular Society, said that there are "many groups, such as Inspire and British Muslims for Secular Democracy, doing important work promoting human rights and shared citizenship to counter-extremism and Islamist narratives" but warned that there is a "danger that this funding will instead end up promoting organisations with ulterior motives – as other similar schemes have in the past.

"In 2011 Theresa May strongly criticised the Labour Government's Prevent programme and promised to end state funding for groups with extremist sympathies, after it emerged that hundreds of thousands of pounds found its way into the hands of Islamist organisations. This proposal is potentially open to similar exploitation by groups masquerading as 'moderates'. There must be careful scrutiny of which groups are funded, to make sure that support is given to the organisations which are genuinely making a difference."

The Strategy makes no explicit reference to proposed controversial Extremism Disruption Orders (EDO's), which have been the subject of a joint campaign called Defend Free Speech by the Christian Institute and the National Secular Society.

The Government now says that extremist organisations will be banned, but "strong safeguards" will exist "to ensure these powers are only used in the most serious cases". In addition, the strategy document says that the powers will not be able to be used against "privately held views or people expressing their religious beliefs" or to "curtail the democratic right to protest", "close down debate" or limit free expression, concerns the Christian Institute and National Secular Society shared about the earlier EDO proposals.

Mr Evans commented: "We're hope that this is a sign that our warnings about the potential threat EDOs pose to everyone's free expression are being heeded by the Government. We would certain oppose any new measures that run the risk of curtaining free speech".

Other measures, to come in a new anti-extremism bill, will "restrict access to premises which are repeatedly used to support extremism" and "strengthen the powers available to Ofcom" to sanction channels that broadcast extremist content or give a platform to hate preachers.

The Muslim Council of Britain immediately criticised the strategy and denied that any mosques held extremist meetings. It also said that the strategy was "flawed" and complained that it focused on "Muslims in particular".

The Government says the strategy will "seek to build more cohesive communities, tackling the segregation and feelings of alienation that can help provide fertile ground for extremist messages to take root", but the NSS questioned how this is compatible with the Government's ongoing support for publicly funded religious schools.

Mr Evans commented: "Faith schools are inimical to building cohesive communities. If faith schools are not directly making things worse, they are at best a badly wasted opportunity to promote integration and break down barriers between people from different faith backgrounds from a young age."

"The Government's failure to consider this just goes to show how well-entrenched religious privilege is."