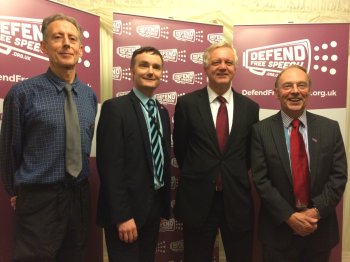 A new campaign to oppose the Government's controversial plans for Extremism Disruption Orders (EDOs) has been officially launched in Parliament.

Described as Britain's 'most unlikely campaign group', the Defend Free Speech Campaign group is supported by the National Secular Society, the Christian Institute, the Peter Tatchell Foundation, English PEN and other organisations who are concerned that legitimate freedom of expression could be criminalised under the Government's counter-extremism proposals.

Speaking at the launch at the House of Commons on Monday Keith Porteous Wood, executive director of the National Secular Society, said: "Free speech and defending it, is the most basic civil right".

He said proposals to crack down on ideas the authorities regard as extreme could be used against those who "have not broken a single law" and "had to be resisted".

The Christian Institute's Simon Calvert, campaign director of Defend Free Speech, said: "The complete absence of safeguards and any clear definition of what is deemed to be extreme will have a chilling effect on free speech and campaigners."

He said the legislation was "badly conceived and will be bad for society."

He added: "Free speech is one of the most precious of all human rights and should be defended robustly. "It can only be legitimately restricted by the law when it involves harmful libels, harassment, menaces, threats and incitements to violence."

Also speaking at the campaign's launch was David Davis MP who has criticised EDO's for "eroding basic principles of freedom without making us any safer".

He said: "Restricting free speech, and forcing those who hold views inimical to our own out of public debate and into the shadows, is an authoritarian act that will only serve to further alienate those who are susceptible to extremist views.

"Only by engaging with extremist views, opposing them and defeating them through debate can we hope to deal with the threat of extremism."

He said he lesson of centuries of British history is that the "best defence of freedom is freedom itself".

The campaign is also being supported by the Green Party's Caroline Lucas MP who warned:

"This kind of draconian crackdown lacks a credible evidence basis, represents an infringement of basic rights, and may well actually be counterproductive."

She said she would be taking "every opportunity to oppose Extremism Disruption Orders when the relevant legislation comes before the House of Commons".

The Government is expected to introduce Extremism Disruption Orders as part of a new counter-terrorism bill which will be published later this year.

The Defend Free Speech campaign reunites the same organisations that successfully campaigned together to remove the word "insulting" from Section 5 of the Public Order Act and to force the Government to scrap plans to outlaw "annoying and nuisance behaviour" in public.

Stephen Evans, National Secular Society campaigns manager, said: "It's incredible that here we all are again trying to prevent the Government from restricting people's right to freely express themselves. Extremism poses a very real threat to British citizens but existing laws prohibiting threats and incitement of violence are sufficient. Bad ideas need to be countered by better ideas, not by legislation that could be used to criminalise ordinary people and silence inconvenient, unfashionable and unpopular opinions.

"This campaign aims to ensure these ill-considered and dangerous proposals do not become law."