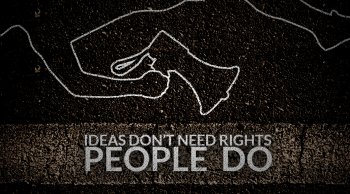 The US-based Centre for Inquiry (CFI) has launched a new website for their campaign to promote and defend free expression, in time to celebrate International Blasphemy Rights Day.

In a statement the Campaign for Free Expression, an initiative of the CFI, explained the rationale for Blasphemy Day, founded in 2009: "International Blasphemy Rights Day is observed every September 30 to commemorate the publishing of the Jyllands-Posten Muhammad cartoons, which angered religious believers around the world, many of whom expressed their disapproval with violent protests, riots, and in some cases, murder.

"While many perceive 'blasphemy' as offensive, this event is not intended to ridicule and insult others. Rather, it was created as a reaction against those who would seek to take away the right to satirize and criticize a particular set of beliefs given a privileged status over other beliefs."

The campaign group added that observing Blasphemy Day "is a way of showing opposition to any resolutions or laws, binding or otherwise, which discourage or inhibit freedom of speech of any kind."

They add that "Freedom of expression, including the right to criticize any belief, religious, political, or otherwise, is the only way in which any nation with any modicum of freedom can exist.

"If you support free speech, and the rights of those who disagree with religious views to voice their opinions peacefully, join the cause and support International Blasphemy Rights Day!"

The new website has case files on people "persecuted for their dissent" and includes educational materials and other resources.

In an introduction to the new campaign website, Michael De Dora, director of the Centre for Inquiry's Office of Public Policy, said responses to and suppression of free expression have "reverberations far beyond any one country's borders".

He called for international action and attention to defend freedom of speech. "There remains a global crackdown on freedom of expression, blasphemy laws exist in more than 50 countries, and often times, in countries such as Pakistan and Saudi Arabia, these laws are still viciously enforced."

But there were some reasons for optimism, he said, because "free expression and the right to criticize and satirize religion, cultural traditions, and governments is now a topic of mainstream debate and discussion."