Religious extremism in Islamic charity is exposed by ITV documentary 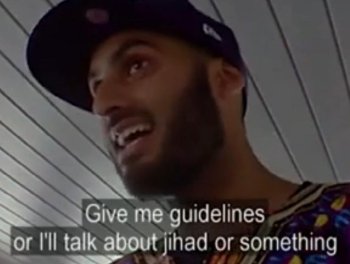 An ITV documentary has exposed radicalism and anti-Semitism in an Islamic charity with alleged extremist links.

The acting Chief Executive of the charity in question, the Global Aid Trust (GAT) has resigned "in connection with" the documentary, which recorded one guest speaker at a GAT event and a GAT worker endorsing jihad.

The worker was recorded praising hate preacher Anwar al-Awlaki, the now-dead jihadi propagandist and al-Qaeda recruiter. The worker said that al-Awlaki was "a scholar, and basically he was imprisoned, and after he came out of prison he started to incite hatred and telling the western Muslims to bomb. He incited bombings, basically. Bruv, he was a brilliant guy though."

The NSS has repeatedly raised concerns about some religious groups misusing their charitable status.

The Global Aid Trust ran a boat trip where a radical preacher, known as Dawah Man (pictured), was invited to speak, but not given a brief for the discussion. When organisers said he could "freestyle" his remarks, he warned them "I'll say some stuff", adding, "give me guidelines or I'll talk about jihad or something".

Dawah Man then went on to say that Europe and America were "controlled by Zionists", adding that "we can safely say that anytime there was an American or English invasion of the Muslim lands, it's all a problem coming back to the Children of Israel".

The Global Aid Trust have released a statement saying that that they do not "promote any extremist activities or terrorism" and that they have "policies and procedures in place for preventing extremism". The Global Aid Trust says it provides "quality education to underprivileged children" in the developing world.

One of the Global Aid Trust's current campaigns is called "Guardians of Qur'an", which advocates "memorisation of [the] Qur'an in 3 years". The Global Aid Trust is also running a nationwide competition on Quranic recitation to "enhance the love of Allah".

The Charity Commission said: "We are already taking action in relation to a number of concerns raised with us as a result of undercover filming in charities carried out by a TV production company."

The documentary also exposed racism in The Steadfast Trust, which describes itself as "the only charity for the ethnic English". Some of the Trust's supporters were caught chanting "White Power" and "Victory to the Aryan Race", and using far-right slogans from Mein Kampf.

The documentary also filmed a speaker at the Hindu Swayamsevak Sangh (UK) charity saying that "to destroy the Hindu history is the secret conspiracy of the Christians".