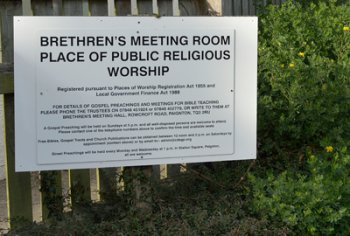 The Brethren practise the "Doctrine of Separation", meaning that they "make a commitment to eat and drink only with those with whom we would celebrate the Lord's Supper." The church is known for its strict regulations and teachings, and their website describes "radio and television as 'pipelines of filth'."

A spokesman for the church told Third Sector that additional applications for charitable status are forthcoming.

The road for the Plymouth Brethren Christian Church (PBCC) to receive charitable status was cleared early in 2014, when the Preston Down Trust (PDT), an affiliate of the church, was registered with the Charity Commission in what was seen as a test case.

The Commission initially denied the application in 2009, finding that the church did not meet the "public benefit" required of registered charities. This requirement comes from the Charities Act 2006, which "removed the presumption of public benefit from certain classes of charity including religious charities." This meant that charities, including religious charities, had to demonstrate a public good, and could not simply rely on promoting their faith to gain registration with the Charity Commission.

Stephen Evans, National Secular Society campaigns manager, said: "it is wrong that the benefits of charitable status – including huge tax breaks – can be applied to an organisation which is, at its core, a religious organisation, and not a charity.

"There appears to be a need to tighten of the definition of what constitutes a 'public benefit' and for existing rules to be enforced to avoid charitable status simply becoming a tax avoidance system for religious groups."

In reaching their decision in the PDT case, the Charity Commission considered a range of activities undertaken by the PDT, which the church argued formed the basis for the "public benefit" of their organisation. One such activity included "open days" where the church distributes food and bibles. Though the Commission notes that "some members of the public have questioned why members of the PBCC do not eat with them and allow access to their meeting halls."

The Doctrine of Separation also raised problems for the PDT's application, with the Commission finding that "there is some evidence that the PBCC are inward facing with a strong focus on their nuclear and extended families (in so far as they are members of the community) and on their local meeting halls and wider PBCC fellowship." The commission added that judgement of whether the "benefits [of the PBCC] are conferred upon the public or a sufficient section of the public" was an "important consideration."

The Charity Commission concluded that "the evidence, on balance, may tend to suggest that PDT operates predominantly rather than exclusively for the benefit of its members" but that was not "necessarily fatal to charitable status."

According to Third Sector, "In announcing the decision, the [Charity Commission] said that the trust had 'demonstrated a willingness to make amends' for harsh disciplinary practices and that it must ensure meeting halls display prominent details about how non-members could attend services."