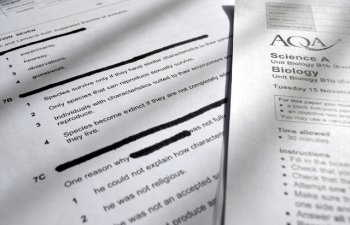 Faith schools will no longer be allowed to redact questions about evolution and reproduction from science exam papers on grounds of religious sensitivity, and any attempt to do so will be treated as "malpractice" the exam regulator has said.

Ofqual has made clear that exam boards must not enter into agreements with schools to allow redactions and that any agreements currently in place should be withdrawn before any further assessments are taken.

In a letter to the National Secular Society, the Chief Regular, Glenys Stacey, said: "From a regulatory perspective we don't think it is in students' best interests to have exam questions redacted from an exam paper. Such a practice denies students the opportunity to demonstrate their full potential across the curriculum they should have been taught and therefore disadvantages them."

An investigation by the National Secular Society in 2013 revealed that exam questions on science papers had been redacted by teachers at Yesodey Hatorah Jewish Voluntary Aided girls' secondary school. A freedom of information request by the NSS revealed that the practice was more widespread than this particular school, and that exam boards, the exam regulator and the government had been colluding with faith schools to shield pupils from key scientific concepts.

The exam board in question, Oxford Cambridge and RSA (OCR), had originally said they intended to "come to an agreement" with schools concerned over "how, when and where the redactions take place – but at the same time respecting their need to do this in view of their religious beliefs".

In correspondence with the National secular Society, education minister Elizabeth Truss described this as a "proportionate and reasonable response."

However, in a dramatic change of policy, OCR this week issued a statement, to condemn the practice:

"We have now been able to consider our position and have concluded that as a matter of policy schools should not be permitted to tamper with question papers prior to a student sitting an exam".

It goes on to say:

"OCR believes that this approach should be adopted by all Awarding Bodies and supported by the Regulator. We told Ofqual that this is the approach we would be taking and wanted clarity from its Board as to whether it would be supporting this policy. We are pleased that the Regulator has said that it agrees with us that such a practice should not be permitted."

Stephen Evans, campaigns manager at the National Secular Society, said: "This is a significant victory for the rights of children and young people to not have their education impeded by religious organisations seeking to pursue their own agenda of inculcation or indoctrination.

"We will now be urging the Government to introduce robust measures to ensure all faith schools teach the National Curriculum in full, including areas that clash with schools' religious ethos, such as evolution and human reproduction."