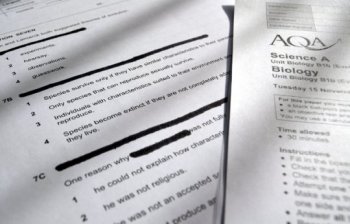 The National Secular Society has discovered that exam boards, the exam regulator and the government have been colluding with faith schools to to shield pupils from key scientific concepts.

A freedom of information request revealed that the redaction of exam questions on science papers deemed incompatible with a school's religious character is being condoned on grounds of religious sensitivity.

In October 2013 the NSS revealed that questions had been redacted on exam papers by teachers at Yesodey Hatorah Jewish Voluntary Aided girls' secondary school.

After raising the matter with the Department for Education (DfE), the NSS was informed by education minister Elizabeth Truss that a "proportionate and reasonable response" had been agreed with the school.

The freedom of information response reveals that faith schools will still be permitted to redact questions they don't approve of as long as this is done in collaboration with the exam board.

Setting out the response to the uncovering of exam malpractice, OCR wrote to the exam regulator Ofqual, stating:

"In our deliberations we have reached the conclusion the most proportionate and reasonable approach would be to come to an agreement with the centres concerned which will protect the future integrity of our examinations – by stipulating how, when and where the redactions take place – but at the same time respect their need to do this in view of their religious beliefs. We believe we need to be mindful of the fact that if we do not come to an agreement with the centres we could be seen as creating a barrier to accessing the examinations for the candidates."

The correspondence reveals that the school was under the impression that, prior to the NSS raising it as an issue, the practice of redaction was something that OCR and other exam boards were aware of and accepting of.

OCR acknowledges in its correspondence that the issue has "significantly wider implications and could apply to other faith schools." In correspondence contained within the FOI response it is clear that neither OCR nor Ofqual regarded the malpractice at Yesodey Hatorah an isolated incident.

In a letter to the NSS, education minister Elizabeth Truss, said: "I can confirm that, like all other maintained schools, Yesodey Hatorah Senior Girls High School will be required to teach the new science curriculum in full from its introduction in September 2014. The Department will be seeking appropriate assurance from the school that this will take place."

Stephen Evans, National Secular Society campaigns manager, said: "Given the Government's laissez-faire approach to the redaction of questions on science exam papers we have no confidence that the DfE will ensure the new science curriculum will be taught in full by all schools.

"The pressure from schools for redaction demonstrates that religious precepts are strongly influencing science classes in some minority faith schools.

"The censoring of key scientific concepts from science lessons and exams by religious organisations pursuing their own religious agenda compromises children's education. It also reveals a lack of concern from the Government over minority faith schools not preparing pupils for life in wide British society."

Lord Avebury, the Lib Dem peer, has put down parliamentary questions asking the Government for details of the redactions and what representations it has made to the Children's Commissioner regarding the right of pupils to see all questions in any public examination they are taking.