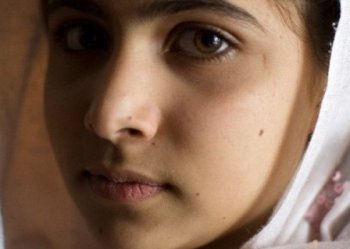 Malala Yousafzai, the inspirational and courageous schoolgirl from Pakistan's north-western Swat valley, who was shot by the Taliban in October for campaigning in support of female education, addressed the United Nations in New York.

The speech, which marked Malala's 16th birthday and represented her first public address since she was attacked last year, called on all governments to ensure free compulsory education for every child around the world. The UN has declared the 12 July "Malala Day".

Malala addressed a delegation of nearly 1,000 students at the New York offices, saying to them: "Let us pick up our books and pens. They are our most powerful weapons".

"One child, one teacher, one pen and one book can change the world. Education is the only solution. Education first."

She noted that she was fighting for the rights of women, because "they are the ones who suffer the most". Of the Taliban who shot her, she said, "they are afraid of women".

Malala's speech comes within the context of a world in which, according to a UNESCO report just released, there are 57 million children globally not attending school, half of whom are living in countries affected by conflict.

Malala, who now lives in the UK and attends school here, has been listed as one of TIME Magazine's top 100 most influential people.

Following the assassination attempt on her life, Malala set up the Malala Fund to help provide education for all young people, with the first grant being provided by the Fund aimed at urging families in her home region of the Swat Valley to keep their daughters in education.

Malala's story sparked outrage around the world after the Taliban said it shot her for "promoting secularism", and in February this year, in her honour, the National Secular Society donated its Secularist of the Year prize fund of £7,000 to a global charity, Plan UK, campaigning to ensure girls everywhere have equal access to education.

A screening of Malala's address to the UN live from New York was held at the Southbank Centre, and a video of the address can be viewed here.