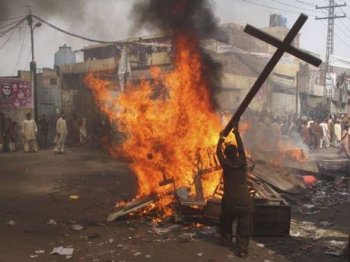 Secularists in Pakistan have strongly condemned attacks on Christians in the country after mobs ransacked a Christian neighbourhood and torched dozens of homes over a blasphemy row in the city of Lahore.

Muslim protesters turned violent after derogatory remarks against the Prophet Mohammed were allegedly made by a young Christian man, Sawan Masih. Reports say 178 houses of the low-income community, as well as shops and 3 churches were looted and burnt to ashes. The local Pastor was attacked and the father of Savan Masih was beaten up and subsequently arrested.

Responding to violence, The Forum for Secular Pakistan said the country is witnessing "the bitter fruit of decades of State and external sponsorship and promotion of the Jihadi groups, as well as the more recent appeasement policy towards the Taliban groups."

A spokesperson for the group said: "Violating the Constitutional safeguards and guarantees, the State has failed to provide protection of life, liberty, honour, dignity, property and possessions. It has now reached a stage where the very existence of Pakistan is at stake.

"The Forum calls for an immediate separation of religion from politics; a clear federal and provincial policy statement regarding concrete measures to protect vulnerable minorities; a substantive change in our school curricula to remove all hate materials; and an immediate revision of the law and section 295-B&C to prevent further exploitation falsely in the name of religion."

Blasphemy is an extremely sensitive subject in Pakistan. According to Human Rights Watch, there are at least 16 people on death row for blasphemy and another 20 are serving life sentences. Opponents of the blasphemy law say it is often used for vested interests, personal vendettas and political gains.