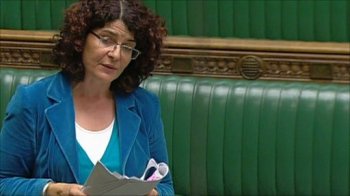 Labour MP Diana Johnson has attempted to over-rule the Church of England by introducing legislation allowing for women to be consecrated as bishops.

Introducing the ten minute rule bill in Parliament on Wednesday, Ms Johnson said: "I certainly do not seek to have Parliament intervene in Church affairs lightly but in matters of discrimination it is very serious and we must speak up."

Responding to those who claim that the matter is solely for the Church, Ms Johnson said the Church was the "national established Church, headed by our Head of State, Queen Elizabeth, the Defender of the Faith and the Supreme Governor... We have 26 bishops sitting in the other place in recognition of the Church of England's important role in lawmaking in this country. We have prayers every day in this place, led by a Church of England chaplain."

Ms Johnson accused the Church of causing an "enormous amount of hurt to women who have a calling to be ordained and serve" and warned: "Our established Church risks going down the path to becoming a sect—a movement becoming a monument."

Opposing the bill, Edward Leigh, a Catholic, said he was "agnostic" on this issue of women bishops, but said the Church should be "entirely independent" of Parliament. However, the Conservative MP made it clear that he still "strongly approved" of establishment "because it is important that we give an impression that we are still a Christian country".

Stephen Evans, campaigns manager at the National Secular Society, said: "Members of parliament involving themselves in church affairs is the very antithesis of secularism – and when they start threatening to do so, it's a clear sign that disestablishment is overdue.

"Rather than glibly proclaiming to be 'on the side of faith', political leaders should seek ways to ensure that our political structures reflect the reality of changing times, and give serious consideration to separating religion from the state. Not only would this signal the state's clear commitment to an open society free from religious privilege, it would also free the Church of any regulation of their activities by the state – so long as they acted within the law."

Read the full debate at Hansard