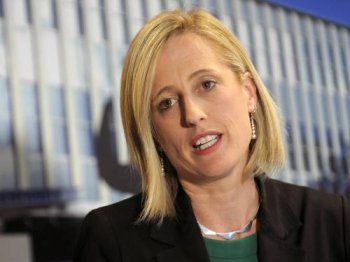 A spat about the separation of religion from governance has broken out between politicians in the Australian capital of Canberra.

Vicki Dunne (Liberal), who is speaker of the Legislative Assembly is challenging the Chief Minister, Katy Gallagher (right) (Labor) to attend a church service to mark the beginning of the new Assembly on February 11.

But Ms Gallagher is insisting that Canberra is secular and that ''as a matter of principle'' she and her colleagues will not take part in the ceremony.

Mrs Dunne wrote to the Chief Minister last week asking her for a second time to attend the service and to join a procession at the beginning of the ceremony and address the congregation. ''Notwithstanding the Labor Party's stance on the issue, I still am pleased to invite you, as the territory's Chief Minister, to attend and participate in the service,'' Mrs Dunne said in her letter. ''Firstly, I invite you to walk with me in the procession at the commencement and in the recession at the conclusion of the service.

''Secondly, I invite you to speak to offer a greeting to the gathering. I would appreciate your co-operation by keeping the greeting to about 300 words.''

Mrs Dunne said the service would be conducted according to Christian liturgy, but she would invite representatives from the ''broader spiritual community'' to the event.

''I hope this church service will establish a strong and lasting link between the Assembly and the many spiritual communities across Canberra,'' Mrs Dunne's letter said.

In her reply, Ms Gallagher reiterated the government's position that ''as a matter of principle, we are opposed to creating a formal nexus between religious worship and the Legislative Assembly."

The Chief Minister said Canberra had been well served by the secular basis of the Assembly. ''I therefore advise that I will not be accepting your invitation to attend and participate in the service, but I wish you all the best for the day.''

Ms Gallagher said on Tuesday that the ceremony could be seen as the beginning of a formal link between the Assembly and the church if she attended. '''I don't want to appear churlish or disrespectful, my declining of the invitation is to make sure we keep the Assembly as the secular institution it has always been. If that is to change it should be done by a vote of the Assembly, not a day that was organised by the Speaker.''