Russians want church to stay out of politics 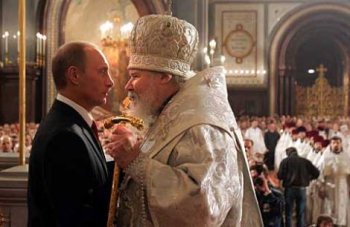 A poll taken in Russia shows that 75% of the population wants the Russian Orthodox Church to stay out of politics.

Half of Russians (50%) have noted the presence of the Orthodox Church in the state's domestic policy, with people increasingly noticing this over the past two years (44% in 2010), say sociologists from the All-RussianCenterfor the Study of Public Opinion (VTsIOM).

Another 43% of respondents are still feeling the Church's influence in Russia's international affairs as well, sociologists said.

The Church's influence is weakest in the lives of ordinary Russians: half of respondents (49%) said this institution has no meaning for them, an increase of 6% from two years ago.

The broadest sphere of influence of the Russian Orthodox Church is the spiritual and moral state of the society, according to 63% of 1,600 respondents polled by VTsIOM in 138 towns across 46 Russians regions in June. Only 16% thought religious institutions should be actively involved in all spheres of public life, including politics.

Confining the Church's influence to the matters of faith is favoured mainly by young (37%) and highly-educated (33%) people and those who distrust the clergy (42%), the VTsIOM poll showed. On the other hand, support for such a limitation was lower among pre-retirement age respondents without higher education (18–19%), villagers (22%) and those who trust the clergy (21%).

The sociological survey revealed that a significant proportion of Russians regard the current relations between the Orthodox Church and the state as being well-balanced and harmonious (43%). This is normally the view of those (57%) who believe that the main sphere of influence of the Orthodox Church is the spiritual moral side of public life. A quarter of respondents (23%) said the Russian Orthodox Church's participation in public life is insufficient. This is primarily the view of those (39%) who expect the Church to be actively involved in addressing all problems of the state, and not just in the sphere of morality and religion.

In Putin's Russia, little separation between church and state