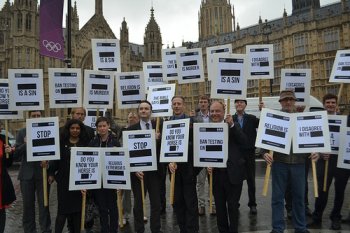 Protesters gathered outside Parliament today to demand greater protection for free speech by reforming Section 5 of the Public Order Act.

Section 5 of the Act outlaws "insulting words or behaviour", but what exactly constitutes "insulting" is unclear and has resulted in many controversial police arrests. In 2008 a sixteen-year old boy was arrested for peacefully holding a placard that read "Scientology is a dangerous cult".

Earlier this year, Human Rights campaigners, MPs, faith groups and secularists joined forces to launch the "Reform Section 5" campaign. The campaign has since won cross-party support in Parliament, and Parliament's Joint Committee on Human Rights have also called for change.

The Government is considering amending the Act, and set up a consultation on whether Section 5 should be amended or not. It closed in January, and seven months later the Government has yet to publish the results.

Campaigners have accused the Government of dragging its feet and say today's protest outside Parliament shows that the issue hasn't gone away.

Speaking outside Parliament, Human Rights Campaigner Peter Tatchell said: "Most MPs back reform, as does the former Director of Public Prosecutions, Lord Macdonald QC. The government's delay and hesitation is unjustified. The criminalisation of mere insults under Section 5 is a threat to free speech. There are other laws to deal adequately with harassment, threats and serious abuse."

Peter Tatchell was joined outside the Houses of Parliament this morning by The Christian Institute's Simon Calvert and Keith Porteous Wood of the National Secular Society.

Find out more about the Reform Section 5 Campaign