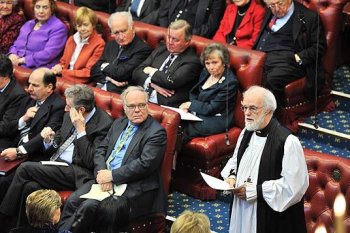 Church of England Bishops will retain reserved seats in the House of Lords according to proposals published today by the Deputy Prime Minister.

There are currently guaranteed places for 26 Church of England bishops in the House of Lords, including both Archbishops and the most senior diocesan bishops.

Under new proposals the number of bishops will eventually be cut to 12. However, in an upper chamber slimmed down from 800 peers to 450 'senators', the status quo is largely maintained.

The eventual composition of the reformed House of Lords will be 360 elected members, 90 appointed members and up to 12 Lords Spiritual. This will only be achieved after two transitional periods of five years during which time there will be a phased reduction of bishops from 21 to 16 to 12. Existing peers will be 'phased' out as elected members are brought in.

Under the proposals, the Church is given new powers to decide which bishops sit in the Lords. The Archbishops of Canterbury and York, and Bishops of London, Durham and Winchester will become members of the House of Lords by reason of holding a named office. In addition, the Church of England will be able to select seven bishops who do not hold a named office as 'ordinary Lords Spiritual'. At present the places on the bishops' bench are occupied by those English diocesan bishops that have served the longest.

On the same day as the Bill was published, a new YouGov Survey revealed 56% of people want the seats reserved for bishops to be abolished. Just 28% were in favour of retaining them.

Keith Porteous Wood, executive director of the National Secular Society, said: "Any proposal with reserved seats for religious leaders is both unfair and undemocratic. Serious proposals to reform the Lords must address the unjustified privilege of the bishops' bench.

"The retention of the Bishops is a missed opportunity and an act of political cowardice. With the Church given new powers to decide which bishops will sit in the chamber, the proposals are likely to increase the influence of the Church in Parliament by creating a new and unaccountable voting bloc of professional religious lobbyists: this is regression, not modernisation".

"We will be lobbying to encourage amendments to get rid of the bishops' bench once and for all."

In a statement from Ed Miliband today he said there are "big questions to resolve" about whether there is a place for bishops.

The Bill is expected to receive a second reading in the House of Commons before MPs rise for the summer recess on 17 July.

The explanatory notes can be read here