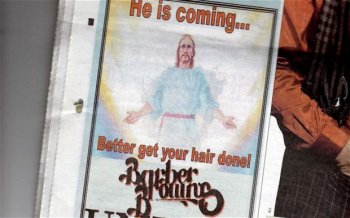 The National Secular Society has accused the Advertising Standards Authority (ASA) of being inconsistent in dealing with complaints about ads using religious imagery after the watchdog cleared an advertisement for a barber's shop that appeared to mock Jesus' second coming but had previously banned adverts for ice cream featuring a pregnant nun and apparently gay priests.

The NSS has written to the ASA's chairman, Lord Smith, asking him to revisit the ice cream ad judgments with a view to reversing them.

In its latest report, the ASA has cleared an advertisement for a barber's shop which was accused of "offending Christians."

The advert showed a picture of Jesus with the text "He is coming… Better get your hair done!" and was created for Barber Brown's salon in Bristol.

Just two people complained that the advert was offensive to Christians and that the ad "implied that Jesus would judge people on their outward appearance" and was offensive as it "depicted the Second Coming as humorous".

Owners of the shop — which has branches throughout the south-west — said it had not been their intention to cause offence, the intention had been for something humorous and "different".

The advertising watchdog ruled that the ad did not breach their guidelines, although it acknowledged that some people might find it distasteful. The ruling said:

The ASA noted that the ad featured a depiction of Jesus bathed in light and that the text appeared to make reference to the Second Coming. We acknowledged that some people might find the ad distasteful. However, we considered that most consumers would understand that it was a light-hearted take on the biblical story rather than a mockery of Christian belief. Because we considered that the ad was unlikely to cause serious or widespread offence, we concluded that it had not breached the Code.

But previously the ASA had banned two advertisements from the ice cream manufacturer Antonio Federici one of which showed a pregnant nun and the other featured two priests who appeared to be on the verge of kissing each other.

Terry Sanderson, President of the National Secular Society, said: "The ASA is completely inconsistent in its approach to adverts featuring religious imagery. It bans much milder advertisements — such as those for the ice cream company Antonio Federici which sent up clergy and nuns rather than anything directly to do with faith — and yet clears this one that parodies Jesus. Where's the logic in that?"

Mr Sanderson said that the ASA may be easing up a little on its previously strict approach to advertising using religious images after NSS staff met with Lord Smith to discuss the ASA's unjustifiable restrictions on free expression.