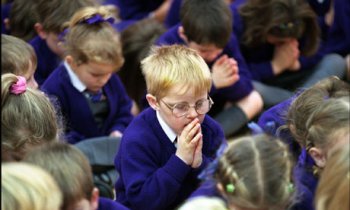 The Church School of the Future, a 39-page report compiled by Dr Priscilla Chadwick for the Church of England, says that it intends to expand the number of Church schools and intensify the religious input into lessons. The Chadwick report calls for a new "concordat" between the Church and the Government that will "reinforce and enhance" the Church's influence throughout the education system.

The Church says that schools "stand at the centre of its mission" and that they enable "more direct engagement with children and their families than any other contact including Sunday worship". It says that schools "must include a wholehearted commitment to putting faith and spiritual development at the heart of the curriculum and ensuring that the Christian ethos permeates the whole educational experience."

The report says that "religious education and collective worship should continue to make major contributions to the Church school's Christian ethos to allow pupils to engage seriously with and develop an understanding of the person and teachings of Jesus Christ."

Church schools, it says, should be enabling children "to flourish in their potential as a child of God" and this is "a sign and expression of the Kingdom that is at the heart of the Church's distinctive mission."

The report makes clear that the Church intends to use its schools as a platform to evangelise throughout the community. In effect, it intends to make state schools into evangelical bases to promote the Church's message to people who would otherwise never choose to have anything to do with it. It says: "New approaches are needed to ensure that the Church's mission is more widely known through schools and is fully understood."

The reports says that partnership between the school and the local church will be strengthened, with a new intention to train clergy to ensure they can make maximum impact in schools. There is also a call to ensure teachers and heads are on board with the Christian message.

Talking to the Times Educational Supplement, the Bishop of Oxford, John Pritchard, who chairs the CofE national board of education, said:

"We need to point to the roots of our values, that they lie in our Christian faith, and that the life, death and new life of Jesus Christ is a touchstone for us. We want to mandate schools to be much clearer on their Christian identity."

But Revd Janina Ainsworth, the CofE's chief education officer, said there was "no contradiction" in promoting deeper study of Christianity even if schools took fewer religious children. She told the TES:

"What we are particularly concerned about at the moment is the quality of teaching about Christianity. Every child is entitled to have that kind of profound engagement with Christianity and to learn more about Christianity than other religions because of its role in the history of the country."

Revd Ainsworth said that learning about Christianity would help children with their spiritual development and denied it was a way "to turn out good, church-going children".

"The report reads like a hard line evangelical tract. State schools should be for teaching, not preaching, far less religious brainwashing on a hitherto unheard of scale of captive children attending their local, state funded school. This is an abuse of the children and a gross misuse of public money.

"Before deciding whether to acceded to the Church's demands, the Government should ponder the following key information omitted from the report: church attendance by the under 19 year olds has dropped by two thirds in the last twenty years and will fall by a further two thirds in the next fifteen years - and that little over 1% of the population attend an Anglican church on a normal Sunday – and they are ageing fast. These figures indicate that the Church of England should be having power taken away from it, rather than its demands for yet more power and privilege being acceded to.

"Above all," said Mr Porteous Wood, "religious schools should be shorn of their ability to cherry pick pupils to the detriment of adjacent community schools."

Read the report in full

The Bishop of Oxford, the Rt Revd John Pritchard, talks about the rationale behind the report on Youtube

Dr Chadwick can be seen explaining her ideas on Youtube