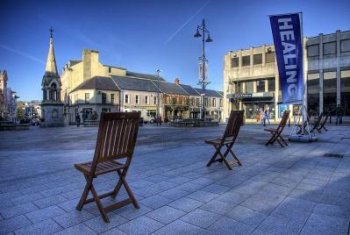 Three Christian MPs are trying to overturn an advertising ban on claims that 'God can heal'. They are Gary Streeter (Con), Gavin Shuker (Lab) and Tim Farron (Lib Dem).

Inspired by the case of the footballer Fabrice Muamba, they want the Advertising Standards Authority to produce 'indisputable scientific evidence' to say that prayer does not work or they will raise the issue in Parliament.

In a letter to the ASA, they wrote "We are writing on behalf of the all-party Christians in Parliament group in Westminster and your ruling that the Healing On The Streets ministry in Bath are no longer able to claim, in their advertising, that God can heal people from medical conditions. We write to express our concern at this decision and to enquire about the basis on which it has been made. It appears to cut across two thousand years of Christian tradition and the very clear teaching in the Bible. Many of us have seen and experienced physical healing ourselves in our own families and churches and wonder why you have decided that this is not possible."

MP Gary Streeter also claims in the letter that he "received divine healing myself at a church meeting in 1983 on my right hand, which was in pain for many years. After prayer at that meeting, my hand was immediately free from pain and has been ever since. What does the ASA say about that?"

The ASA follows the Committee of Advertising Practice's Code, which has a special section on health. Rule 12.1: states that Objective claims must be backed by evidence.

Religious groups cannot and must not be exempted from the rules of advertising or they could – and would – claim all kinds of magical abilities. In this instance they were claiming to cure very specific illnesses through prayer.

They provided no evidence that they could do this, as every other advertiser has to do. If there was no brake applied to religious claims you can be sure that before long some suspect televangelist would be selling expensive, useless miracles to the desperate and vulnerable.

There is no reason Christians shouldn't believe that God can cure them if they want to. But if they make those claims in advertising they will be subject to the same rules as everyone else.

The irony is that, while the ASA is very good at banning adverts that make unproveable claims, it is often over-sensitive to claims of adverts 'offending' religious people. The NSS has complained about the CAP code because of this. The Federici ice cream adverts that were banned because just a handful of people complained they disrespected religion are a case in point. The CAP code on religion gives it too much consideration, not insufficient. So if the ASA says a religious advert goes too far, you can be sure they mean it.

The full letter to the ASA is here and Martin Robbins has written a guest blog about this.