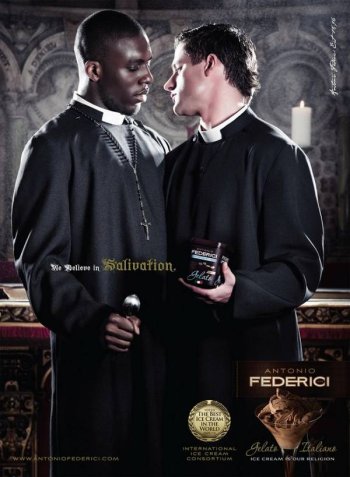 The Advertising Standards Authority (ASA) has dismissed a complaint from the National Secular Society which had accused the ASA of unreasonably restricting freedom of expression by banning advertisements too readily if they risk offending even a few believers.

In a long justification of its enforcement of the Code of Advertising Practice, the wording of which the NSS also attacked, James Best, chairman of the CAP, refused to accept any of the NSS's points about its banning of ads that poke even mild fun at religion.

The complaint arose from the banning of a series of advertisements from the ice cream company Antonio Federici, which, in the ASA's word were "offensive, because they believed they mocked Catholicism".

Keith Porteous Wood, Executive Director of the National Secular Society, said: "When the adverts were banned, the NSS said that the ASA was introducing a new sort of blasphemy law through the back door. This response from the ASA gives us no reason to change that opinion. When did it become illegal to satirise Catholicism?"

Mr Wood said: "We have become increasingly concerned about an unreasonable deference to religion by the ASA. We were particularly irked by the banning of the ice cream ads, one of which (in the ASA's own words) "showed two priests in full robes who looked as though they were about to kiss. One of the men also wore rosary beads and held a spoon in his hand; the other held a tub of ice cream. The ad included text that stated 'We Believe in Salivation'.

The advertisements were ruled by the Authority to have breached the Code of Advertising Practice (CAP) and the number of complainants is often pitifully small, just six in the case of the priests and ice cream ad.

The Code of Advertising Practice includes the ruling that ads "should contain nothing that is likely to cause serious or widespread offence. Particular care should be taken to avoid causing offence on the grounds of race, religion, sex, sexual orientation or disability".

Growing sensitivity is also evident in Italy and France, both of which have banned an ad depicting the last supper.

The NSS complained last year to the ASA, and a high level meeting was arranged between the ASA's chair, Lord Smith of Finsbury (supported by senior executives), and Keith Porteous Wood and NSS senior campaigns officer, Tessa Kendall.

Mr Wood said: "We emphasised the importance of freedom of expression and pointed out that one of their adjudications had recently been overruled by the courts on grounds of freedom of expression. Ironically, the case had been brought by a fundamentalist church, in respect of the banning of its advert criticising Gay Pride parade inBelfast. The ad was headlined 'The word of God against sodomy' and invited those who opposed the parade to meet peacefully.

Mr Wood continued: "We told Lord Smith that the wording of the Code of Advertising Practice, particularly the passage quoted above, was a major factor in the decision to which we objected. We therefore complained again to the ASA, this time about the Code." The NSS is now considering its next step.

Read the original letter from the NSS to the ASA (pdf).

Read the reply from the ASA (pdf).