Lords Reform Committee to recommend retention of the bishops' bench 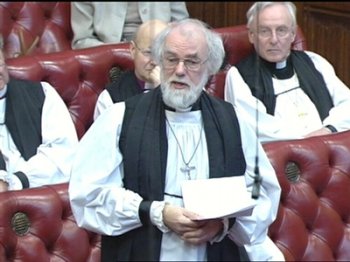 According to a BBC report, recommendations from the Parliamentary Joint Committee on House of Lords Reform due to be published in May will include keeping the Bishops Bench but reducing the number from 26 to 12.

Ministers have made clear that they intend to accept this proposal and it will almost certainly be included in the Queen's Speech in May.

The National Secular Society has long campaigned for the removal of the bishops from the House of Lords, arguing that they are an anachronism in a modern democracy.

Keith Porteous Wood, Executive Director of the National Secular Society, said: "Britain remains the only country in the world that still gives religious representatives the right to sit in its legislature. A 21st century reform that retains the bishops is a betrayal of democracy and political cowardice of historic proportions.

"These reforms are likely to increase the power of the bishops. Even if their number is reduced to 12 from 26 this means they will form a higher proportion of the second chamber than they do now. What's more, the 12 are likely to become professional lobbyists rather than diocesan bishops attending on a rota.

"The bishops simply duplicate religious representation already provided by the mix of members in the Lords. They cannot make any real claim to be representative either: the bishops are all middle class men from England alone and only one in 50 of the population attends their churches on a normal Sunday."

Mr Wood said that retention of the bishops was a betrayal of Britain's diverse population. "Claims by the bishops that they speak for all religions are patronising and dishonest. In many instances they have conspired to use their privileged position in parliament to protect the interests of their own Church."

You can read our evidence to the House of Lords Reform Draft Bill Committee here.

The complete list of written evidence can be read here. (Ours appears on page 506)